In this morning’s roundup of movie news ‘n’ notes from around the web, Hollywood is awash is brothers looking for deals: the Weinsteins, the Gores, the Scotts …

Claude Brodesser-Akner thinks that brothers are going to end up buying Miramax Films from Disney – but he suggests that it’ll be the super-rich Gores brothers rather than Miramax’s founders, the Weinsteins. While the Gores’ bid is reportedly less than the one made by the group that would bring the Weinsteins back, it has the advantage of being an all-cash offer: “a surefire buyer like the Gores has to look enticing, especially when it’s a family that’s clearly planning to buy their way into Hollywood one way or another.” Oh, but a Weinstein return would be such a better story. (Vulture) 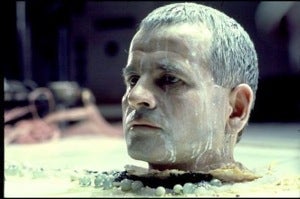 While we’re on the subject of brothers, the Financial Times says that directing brothers Ridley and Tony Scott are interested in restructuring MGM and “steering [the studio] back to solvency.” Total Film runs down the details, which are vague at best (and the original Financial Times story requires a subscription). Despite the success of Scott films ranging from Ridley’s “Blade Runner,” “Alien” (right) and “Gladiator” to Tony’s “Top Gun” and “Crimson Tide,” to say this is a longshot would be an understatement. (Total Film)

David Poland delivers his verdict on the Los Angeles Film Festival’s move to downtown Los Angeles: “There is nowhere else to go.” But he’s worried about the parking, and he points out a potential conflict between the LAFF’s opening night and a possible final game of the NBA finals acoss the street at Staples Center. I don’t think you have to worry too much about that: for a Game 7 to take place at Staples, the Lakers would have to get to the finals (no sure thing, considering how they’ve been playing), and their opponent would need to be somebody other than the Eastern Conference’s best team, the Cleveland Cavaliers, who’d host the last game in a Lakers/Cavs series. And the number two team, the Orlando Magic, might well end up with home-court advantage as well. As for parking, Film Independent assures me that they’ve secured low-cost parking for festival patrons; I guess we’ll find out what they mean by “low-cost.” (The Hot Blog)

“Before, we were in the dark ages,” the MPAA’s ratings board’s chairwoman, Joan Graves, tells Richard Verrier about the new, improved website that gives ratings info going back to 1968. The modest mea culpa is part of Graves’ latest attempt to sell the system as friendlier and more open than it was in the past. The song, you might say, remains the same … (Los Angeles Times)

Earth Day as a marketing opportunity: Annette Bordeau has the details on a couple of releases timed to coincide with Earth Day on April 22. For the second year in a row, Disney will release a nature documentary on that day; last year it was “Earth,” this year the only slightly less-appropriate “Oceans.” And the studio promises to donate 20 cents from each opening-week ticket to the Nature Conservancy’s Adopt-a-Reef Program. 20th Century Fox, meanwhile, is putting out the “Avatar” Blu-Ray disc on that day, and offering fans the chance to go online, join “The Avatar Program,” and “adopt” one of the million trees Fox has planted or will plant by the end of the year. The Blu-Ray contains no extra features … just the satisfaction of helping the planet on its special day. Or something like that. (Moviefone)

Louisiana and Australia may not have a lot in common, but apparently they’re similar enough to have been in contention for a couple of film shoots lately. And in both cases, the filmmakers chose Louisiana. Encore magazine says that the latest production to wind up in the gulf state is Universal’s bigscreen adaptation of the board game Battleship, which was considering a Queensland shoot. “Green Hornet” made the same choice. (Encore)