In this morning’s roundup of movie news ‘n’ notes from around the web, movie marketing goes under the microscope, while “Red Dawn” isn’t ready to come up quite yet.

Larry Gerbrandt asks a provocative question – “does movie marketing matter?” – and then tries to answer it with a barrage of statistics. Turns out that for every dollar spent making a film, the major studios spend another 51 cents on prints and advertising, or P&A; his figures show that you get a return on your P&A investment on movies that are released on more than 4,000 screens (in other words, big, expensive would-be blockbusters), but it’s hardly worth the money if the release is on fewer than 500 screens. In the end, it appears that the answer to his question about whether movie marketing matters is something along the lines of “it depends.” (The Hollywood Reporter) 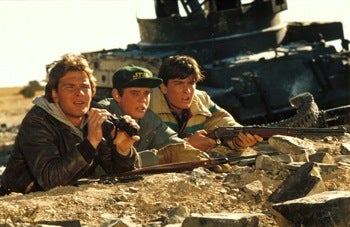 If there’s one thing that Patrick Goldstein really loves (besides going to lunch with Hollywood bigwigs), it’s tweaking conservatives who bash liberal Hollywood. In this installment of his informal but long-running series, he looks at the delight in the “conservative blogosphere” over the November release of the $75 million remake of “Red Dawn,” the 1984 John Milius action flick about patriotic teens fighting off invading commies who snuck in while our government was asleep. Then Goldstein breaks it to them not-so-gently: it only cost $42 million; it’s not coming out in November because its studio, MGM, is in disarray; and despite the giddy description on Libertas Film Magazine, it doesn’t include any Toby Keith songs. And he wonders if the righties are going to find another nefarious liberal conspiracy in all of this. (The Big Picture) (From left: Patrick Swayze, C. Thomas Howell and Charlie Sheen in "Red Dawn.")

Sony presents a “3D show and tell” on its studio lot, and Anne Thompson reports from an event where Sony American CEO Howard Stringer says the company is “blazing a trail in every part of the 3D universe.” Sony plans to spend $100 million marketing 3D, she says – but when Thompson realizes that the most impressive thing she saw at the presentation was 3D sports broadcasting, she wonders if this couldn’t be bad for the movie business in the long run: “[I]t hit me that this is the last thing the movie business needs: immersive 3D games and home entertainent on fancy screens on top of all the other competition for viewer attention.” (Thompson on Hollywood)

Michael Bay is back on the “Transformers” beat for movie number three, and he almost admits to Anthony Breznican that the last installment was disappointing. “I’ll take some of the criticism,” says the director, who then blames the writers strike of 2007-2008, and the rushed production schedule. This time around, expect no “dorky comedy,” a better villain and a “killer ending.” Oh, and despite Bay’s worries that the format doesn’t fit his frenetic editing style, it will be in 3D. (USA Today)

They’re jockeying for position in the summer moviegoing season: Matt Goldberg says that "Battleship" has pulled out of its May 25 release date so as not to get in the way of "Men in Black III"; now it’ll come out a week earlier, where it’ll be going up against the animated film "Madagascar 3."  Then again, none of these films have been shot — this is May 2012 we’re talking about — so all of this is subject to change.  In fact, it’s likely to change, and sort of silly to be announcing date changes this far in advance.  (Collider)

Perri Nemiroff has a modest proposal about sequels: if your movie doesn’t get at least a 60 percent positive score on Rotten Tomatoes’ Tomatometer, you shouldn’t be able to make one.  Of course that’s the kind of rule that’d get you laughed out of Hollywood — witness the just-announced sequel to "Clash of the Titans" (30 percent on Rotten Tomatoes), which could begin shooting as early as next January.  (Shockya)

James White announces startling news about the “Twilight” saga: the final chapter, “Breaking Dawn,” will be broken into 17 separate movies “to make sure that the franchise continues into the next decade and beyond.” Then he admits that no, it’ll actually only be broken into two, as Summit announced on Thursday. (Empire Online)