In this morning’s roundup of movie news ‘n’ notes from around the web, “Pirates” and “The Cove” might have good news, but nobody’s going to the movies in England.

Wenn.com is saying that “an embarrassing leak” has been prevented after the shooting script for the new “Pirates of the Caribbean” movie was left in a London café – but the whole thing sounds a bit suspicious to me.  The story: Somebody working on the movie accidentally left a screenplay behind after a breakfast meeting, but secrecy was preserved when “a film fan” found the script and turned it over to the Sun newspaper without even looking at it – because, he or she said, “I want to enjoy the movie when it comes out.”  But wait a minute: Disney is happy because the good Samaritan returned the script not to the studio but to a British newspaper?  Label me cynical, but do they honestly think that the paper doesn’t now have a photocopy of the entire thing?  Quoth a Disney spokesperson, “It’s good to see Sun readers are honourable citizens.” Yeah, but what about Sun editors?  (Toronto Sun) 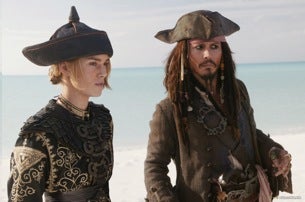 The U.S. government apparently has a piracy guru, and this week she’s announced 30-plus steps to combat file-sharing and downloading and counterfeiting.  Victoria Espinel, whose actual title is “U.S. intellectual property enforcement coordinator,” made her recommendations, and Richard Verrier cuts through the dense thicket of government verbiage to deliver a rundown on some of them: work with foreign governments, “crack down on foreign-based websites that engage in piracy,” develop a database …  Oh, and make sure that the U.S. government isn’t buying counterfeit or pirated products.  (Company Town)

Some of the 2010 U.S. box office figures have been pretty lackluster, but it’s nothing compared to the business in England.  The Guardian runs the numbers and has the depressing conclusion: last weekend’s box office was down by more than two-thirds over the comparable weekend last year, and you can’t entirely blame the World Cup because it’s down by 25 percent compared with the equivalent weekend at the last World Cup. “Improving weather, an England game on Friday and unappealing new releases created a perfect storm of public non-interest,” writes Charles Gant in the wake of the worst U.K. box office weekend since December 2004. (The Guardian)

It turns out that “The Cove” might have some theatrical life in Japan after all.  Some theaters have canceled scheduled showings of the film for fear of protests from a nationalist group, but Hikoro Tabuchi reports six other theaters are going ahead with their plans to show it – and the film’s Japanese distributor says 16 more are considering runs. Meanwhile, a pair of newspapers have called the fight a free-speech issue: “We urge the remaining theaters not to falter,” wrote the Tokyo Shimbun.  (New York Times)

Has the art and influence of film criticism slipped to the point where TV critics are writing work that has more substance and attracts more interest?  Noel Murray thinks so, and Vadim Rizov agrees that “the general level of literacy and engagement in TV criticism tend[s] to be higher, on average, than in film.” He says that’s partly because we all know which TV shows are good and which aren’t, which frees television critics to write “actual criticism” as opposed to thumbs-up or thumbs-down summations. He might have a point, though the first commenter has one too, when he points out that he didn’t know that film and TV criticism were in competition. (The Independent Eye)