In this morning’s roundup of movie news ‘n’ notes from around the web, it’s time for riffs on “Inception,” action, journalism … and the Tom Cruise problem.

Until Terrence Malick finishes “The Tree of Life,” the most eagerly-awaited movie around has to be Christopher Nolan’s “Inception” (below), which Warner Bros. has started to show to select journalists.  (Not me, sad to say.)  Aside from a few tweets, Rolling Stone’s Peter Travers appears to be the only person to write an actual review, parts of which were run in the New York Post by Lou Lumenick.  The gist: it’s got echoes of “Blade Runner” and “Memento” and “The Dark Knight,” it’s “the mind-blowing movie event of the summer” (if that’s not a quintessentially ad-ready Travers blurb, nothing is) and it “turns your head around six ways from Sunday.”  But it gets three-and-a-half stars, not four.  (The New York Post) 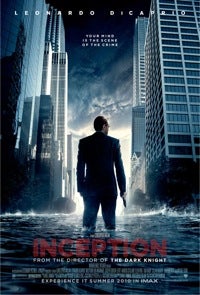 We’ve seen lots of summer movie preview stories, and “why is summer such a vast wasteland at the Cineplex?” articles.  And now A.O. Scott chimes in with a variation on the theme – in his case, it’s all about how summer is the season for action movies.  “Action comedy, action adventure, intense action, cartoon action, thrill-ride blockbuster jump-out-of-your-seat action … The word is ubiquitous … but its meaning is elusive.”  He also points out that technically, every movie is an action movie – but he’s not talking about every movie, he’s talking about “The A-Team” and “Knight and Day” and their ilk.  No surprise, he liked “Jaws” better than any of ‘em.  (The New York Times)

Anne Thompson turns her “Career Watch” microscope on Tom Cruise, whose latest attempt to get audiences to forget about Scientology and couch-jumping is “Knight and Day.”  She says he’s still “ a formidable big-screen star” with a broad range, but that his biggest problem – he “has to be the smartest guy in the room” – has turned off audiences to the point where “many moviegoers actively avoid Cruise, who has come to represent the worst excesses of the studio system.”  Ouch. And while Thompson seems to like “Knight and Day,” she points out that the tracking isn’t strong.  (Thompson on Hollywood)

Jeff Wells has a different take on Cruise – namely, that he’s too far gone to ever again play the Everyman.  That’s what Wells posits in a brief riff on Cruise in “Knight and Day” and the announced-but-not-yet-filmed comedy about his “Tropic Thunder” character Les Grossman.  To Wells, that means that Cruise “seems to have accepted his forceful-guy-with-a-bent-personality persona,” and that he’s recognized that he can never play the “struggling everyman a la ‘Jerry Maguire.’”  He thinks this makes Cruise the new William Shatner, though I think the guy has got a long way to go before he hits that lovable-loon Shatner territory.  (Hollywood Elsewhere)

Documentary filmmakers and news organizations are continuing to line up behind “Crude” director Joe Berlinger to fight the court ruling that he must hand over raw footage from the making of his doc to Chevron.  Eugene Hernandez reports that an amicus brief in support of Berlinger’s case has now been signed by a host of entertainment-industry and journalistic outfits, including ABC, CBS, NBC Universal, the AP, the Directors Guild, the New York Times, the Washington Post, the Hearst Corporation, HBO, the International Documentary Association and the Dow Jones Company.  Berlinger, who was granted a stay in early June, is due back in court in mid-July …  (indieWIRE)

Cinematical’s “Best Summer Movie of All Time Tournament” is coming down to the wire a lot faster than the World Cup.  It’s now down to the final eight, four of whom are available for voting.  In early returns, “Raiders of the Lost Ark” has twice as many votes as “Back to the Future,” while “The Empire Strikes Back” has a similar lead over “Jaws.”  Waiting in the wings: “Star Wars” and “The Dark Knight.”  (Cinematical)