In this morning’s roundup of movie news ‘n’ notes from around the web, Peter Jackson (anonymously?) talks “Hobbit,” and a filmmaker makes (fair?) use of Phil Spector’s music.

Ain’t It Cool News’ Harry Knowles, of all people, looks at recent Deadline stories about “Spider-Man” and “The Hobbit,” and longs for the good old days(say, before AICN?) when print reporters would take the time track down the details and get sources on the record rather than “putting an emphasis on ‘first’” as they rush to the web.  One interesting aspect is that in debunking the idea that it’s news that Peter Jackson might direct “The Hobbit,” Knowles clearly has a conversation with Jackson – and while Knowles says “I’m waiting till I can get the story on the record,” he then proceeds to quote, at some length, a source he insists on calling Derek, without even trying to hide the fact that his source is unequivocally Jackson himself. “I've always said that me directing was one option, and so that's not really news,” says “Derek.” “The studio are [sic] working out what that deal would look like, because how else do they know if it's a viable option? But it's honestly one of several different options …. ” (Ain’t It Cool News) 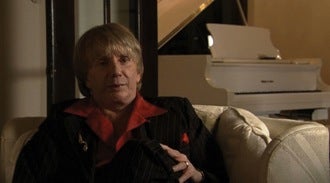 How do you make a documentary about a legendary music figure without the rights to his music?  John Anderson considers the case of “The Agony and the Ecstasy of Phil Spector” (right), a doc about the pioneering music producer that uses 21 of Spector’s songs without getting written permission.  (The filmmakers did get interviews with Spector during the first of his two trials for the murder of actress Lana Clarkson.)  Director Vikram Jayanti’s interpretation of “fair use,” says John Anderson, could be headed for court. (The New York Times)

Todd McCarthy laments that he hasn’t been able to attend the Los Angeles Film Festival as much as he would have liked, but he approves of what he did see: “The Kids Are All Right,” “The Leopard,” “Animal Kingdom,” “Farewell,” “The New Year.”  But he’s not a particular fan of the fest-closer, “Despicable Me.”  (Todd McCarthy’s Deep Focus)

Anne Thompson reports from the Palm Springs Shorts Fest (108 degrees on Sunday!), where actor James Franco screened the three 2009 shorts he directed, and then talked to Peter Bart about acting in films and on “General Hospital,” making shorts, doing art and studying at NYU, Columbia and Yale. She says that after listening to him, “finally it all started to make sense.” (Thompson on Hollywood)

Another festival: Bryce J. Renninger details the three premieres that have “brought inspired debates” to the Silverdocs Film Festival outside Washington, D.C.  The three films in question from the long-running documentary festival are “On Coal River,” about West Virginians battling the government; “The Disappearance of McKinley Nolan,” about a soldier who went AWOL during the Vietnam war; and “HolyWars,” about a meeting between a fundamentalist Christian and his Muslim counterpart. (indieWIRE)

Guy Lodge has the winners of the Edinburgh Film Festival: Best British Feature to “Skeletons,” the New Directors Award to “Monsters,” Best International Feature to “The Dry Land,” Best Feature Documentary to “The Oath” …  The key honor might be the Audience Award, which in recent years has gone to Oscar winners-to-be “Tsotsi” and “Man on Wire,” and future Oscar nominee “The Secret of Kells”; it was given to “Get Low,” with Robert Duvall, which will be released by Sony Classics in July. (In Contention)