In this morning’s roundup of movie news ‘n’ notes from around the web, May was bad, celebs take on British Petroleum and there’s an app for “Toy Story 3.”

Brandon Gray sums up the money side of May: “one of the weakest starts to a summer movie season in recent years.” Overall business was down 11 percent from 2009 and five percent from 2008. He blames “lackluster movies and marketing campaigns” – though, as he points out, you can’t really say it’s been a bad year: January, March and April were the highest on record, while February was the second-best ever. So the sky’s not falling quite yet. (Box Office Mojo) 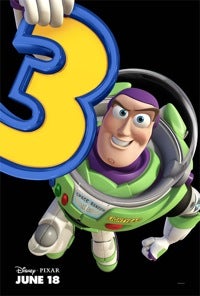 Disney wants you to buy “Toy Story 3” tickets, and they want you to tell your friends to buy “Toy Story 3” tickets — preferably at the same time, so to that end they’ve created a Facebook application that the company says is the first of its kind. Brook Barnes passes along the details: the application is called Disney Tickets Together, and when you use it to buy tickets it alerts your Facebook friends and suggests that you ask them to buy tickets as well. Disney says the application, which people have used to buy as many as 80 tickets, makes sense “because moviegoing is one of those activities that is inherently social.” It also inherently – or at least usually – takes place in a room full of strangers, but maybe Disney can change that. (The New York Times)

The Wall Street Journal notices that some celebrities are weighing in on the British Petroleum oil spill, and wonders if they really have anything to offer. The obvious implication, from the way the WSJ raises the question, is that the celebs don’t – but the story doesn’t actually say that, since James Cameron has significant deep-sea experience, and Kevin Costner does have a company that has developed technology that could conceivably be applicable, (That doesn’t stop them from bringing up the flop “Waterworld,” though they mistakenly say that Costner directed the film.) As for the final celeb mentioned, Robert Redford, he’s kind of beside the point, since he simply took out an ad calling for a reassessment of U.S. energy policy. In other words, the Journal starts from a position of snark, but doesn’t really say anything that justifies that attitude. (Speakeasy)

When Paramount sent out casting notices looking for 13-to-14-year-old Midwestern girls for an upcoming film, lots of people (including Erik Davis at Cinematical) decided it was a secret casting call for J.J. Abrams’ highly secretive “Super 8,” which apparently has to do with teenage girls and aliens. But the Playlist looked at Production Weekly, and announced that no, it’s for a remake of the 1980 Kristy McNichol/Tatum O’Neal movie “Little Darlings.” Then Playlist commenters said things like “Are you sure about this? Sounds like a double-bluff to me.” Conspiracy theories live on ….  (The Playlist)

The Jim Carrey/Ewan McGregor gay comedy “I Love You Phillip Morris” has been bumped from a July to an October release – but not because it’s been deemed Oscar-worthy, as is often the case with films moved into a fall release slot. Instead, the delay comes courtesy of a California District Court, which the Hollywood Reporter says has issued a preliminary injunction preventing the release of a film that first screened at the 2009 Sundance Film Festival. At issue is an agreement between the French company EuropaCorp and the U.S. distributor Consolidated Pictures Group, which EuropaCorp says has failed to pay its $3 million advance. (THR,Esq.)

The best summer movie of all time? Cinematical is conducting a tournament, and now they’re down to the final 16. The first half of the round pits “Star Wars” against “Ghostbusters,” “Return of the Jedi” against “Back to the Future,” “Forrest Gump” against “Jurassic Park,” and “Jaws” against “Pirates of the Caribbean: The Curse of the Black Pearl.” “Star Wars,” “Jurassic Park” and “Jaws” are leading comfortably at the moment, while “Future” has a narrower lead over “Jedi.” Pretty sensible choices all around, I’d say. (Cinematical)