In this morning’s roundup of movie news ‘n’ notes from around the web, a lawsuit makes everybody look bad, and is the umpire who goofed ready for his closeup?

Sam Adams predicts that nobody will come out a winner in “Hurt Locker” producer Nicolas Chartier’s lawsuit against individuals who downloaded the movie via BitTorrent. The “misguided” Chartier comes across like a jerk, he says, while the Internet users who expect free content have an “underlying sense of entitlement” that ignores the fact that “the ability to view ‘The Hurt Locker,’ or to see any movie or hear any album, is a luxury and not a right.” Adams would like to see somebody staking out a middle ground, which in this particular argument is pretty much unthinkable. (Salon) 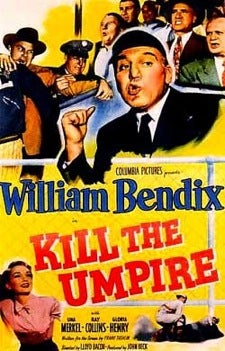 On the heels of Detroit Tigers pitcher Armando Gallaraga losing a perfect game because of a blown call by first base umpire Jim Joyce, Steven Zeitchik wants to know why there hasn’t been a great movie about umpires. Then he decides that the real question is why there haven’t been any movies about umpires, aside from a 1950 William Bendix flick called “Kill the Umpire.” He thinks an ump film would give you “a tragic figure, a searing sense of injustice and an angry mob.” Yeah, but people kinda hate umpires and referees and their ilk, even if they feel sorry for Joyce after he admitted his devastating mistake. But maybe you could do an exploitation picture about an umpire who snaps and goes on a rampage because of the abuse he gets over a blown call – you know, “The Umpire Strikes Back.” (24 Frames)

The website that used to be The Auteurs is now Mubi, although you can’t really tell from most of its pages. But whatever you call it, the site has launched an exemplary model for streaming significant films for modest fees – witness the just-launched “Le Cinema D’Agnes Varda,” an online festival of sorts that offers 19 of the veteran director’s movies for either $1 or $3. “From anticipating the French New Wave to inventively embracing and re-defining digital video, Belgian-born auteur Agnès Varda has always bounded forward with a restless, inspiring joy for filmmaking,” says the site. And there’s a lengthy critical appreciation to help you decide where to start. (Mubi)

Alejandro Gonzalez Inarritu’s “Biutiful,” which screened at Cannes and won a Best Actor award for Javier Bardem, has yet to pick up a U.S. distribution deal. But the film is selling well overseas, reports Stuart Kemp, who gets an update from the film’s international sales label, Focus Features International. It’ll be Sun Distribution in Latin America, Universal in Italy and Spain, Optimum Releasing for the U.K. and Prokino for Germany, along with a variety of deals for other territories. For now, Focus refuses to sell its films in China. (The Hollywood Reporter)

"Big-budget Hollywood doesn’t often venture into narrative ambiguity," writes Danny Leigh.  "Can Christopher Nolan’s ‘Inception’ pull it off?"  He spends about 750 words wondering, and then decides that he doesn’t know.  (The Guardian)

The L.A.-based festival Outfest has announced the rest of its 2010 lineup, adding closing-night film “Spork” and gala screenings of “The Owls” and “Undertow” (“Contracorriente”) to the 11-day slate. Bryce Renninger has the lineup for a festival that had previously announced opening-night attraction “Howl” and Outfest Achievement Award honoree Jane Lynch. (indieWIRE)