In this morning’s roundup of movie news ‘n’ notes from around the web, the awards just keep on coming, while a political Iranian filmmaker goes missing.

Anne Thompson goes to the Women in Film Crystal Awards, and sums up this type of event nicely: “the folks who nab prizes are the ones who have enough studio backing to pay for some ads and a table, and everyone is there to sell something, whether it’s their own brand, future employment or legacy.” But she enjoyed herself, as kudos went to Eva Marie Saint, Courteney Cox, Zoe Saldana (whose “entourage went on for miles, as did her thank you speech”), director Lisa Cholodenko and Universal co-chairman Donna Langley. (Thompson on Hollywood)

Iranian director Jafar Panahi, who had been imprisoned for two months and was reportedly being help because the government feared he was making a film critical of the regime, was released from jail on May 25. But, reports the AP, another Iranian director whose films have been critical of the government has been missing since the day before Panahi’s release. Daryush Shokof, whose two latest films are “Hitler’s Grave” and “Iran Zendan,” was last seen in Cologne, where he was preparing to board a train to Paris. German police say there’s no evidence of a crime, but a friend of Shokof’s tells Kirsten Grieshaber that the filmmaker was receiving threatening phone calls, and adds, “We fear the Iranian regime is responsible for his disappearance.” (The Associated Press via the Brandon Sun) 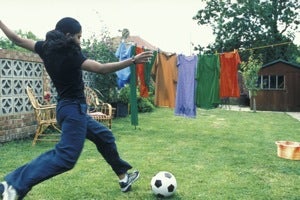 John Horn wonders why Hollywood has never made a great soccer movie. It’s overdue, he suggests: “Boxing might have ‘Raging Bull’ and ‘Rocky,’ baseball ‘Bull Durham’ and ‘Field of Dreams,’ football ‘North Dallas Forty’ and ‘The Longest Yard,’ basketball ‘Hoosiers,’ ice hockey has ‘Miracle’ and ‘Slap Shot,’ and even billiards has ‘The Hustler’ and ‘The Color of Money.’" The answer seems fairly simple: the mainstream American audience for which Hollywood makes movies follows those sports more avidly than it follows soccer – particularly during the ‘70s and ‘80s, when most of those films were made. That’s why the most notable soccer movies – “The Damned United,” “Bend It Like Beckham” (left) – tend to come from countries where there’s more passion about the sport. Producer Joe Roth, who co-owns a Seattle soccer team, puts it succinctly: "We’re basically a xenophobic country and don’t look at what’s going on in the rest of the world as closely as we should." (Los Angeles Times)

David Ansen, the longtime film critic for Newsweek, now has a gig as the artistic director of the Los Angeles Film Festival, which kicks off on June 17 at the Regal Cinemas in downtown Los Angeles – half a block from the Staples Center, where game seven of the NBA finals will be taking place if the series goes that far. Todd McCarthy talks to Ansen about the balance required by an L.A. festival, the LAFF’s new emphasis on international films, and the risks of losing that Westside audience by taking the fest downtown. (Todd McCarthy’s Deep Focus)

As usual, one of the prime uses of the MTV Movie Awards was to aid in the marketing of upcoming films via special clips, ads or new trailers. Awards Daily collects the main debuts on Sunday night’s show: “The Twilight Saga: Eclipse” (only one glimpse of a shirtless Taylor Lautner!), “Scott Pilgrim vs. the World” and, until Viacom pulled it down because of a copyright claim, a pretty effective “Harry Potter and the Deathly Hallows” clip. But Thompson on Hollywood still has the “Harry Potter, clip” along with “The Last Airbender” and several moments from the show.