In this morning’s roundup of movie news ‘n’ notes from around the web, the movie business heads to ShoWest and South by Southwest.
Scott Bowles previews ShoWest, where exhibitors are facing an expensive question: How big is 3D going to be, and how much do they need to spend to be ready for it? What makes the question even trickier, apparently, is that the fewer theaters convert to 3D, the more special it seems, and the bigger surcharge theater owners can add to their regular ticket prices. And you just know they love those 3D surcharges. (USA Today) 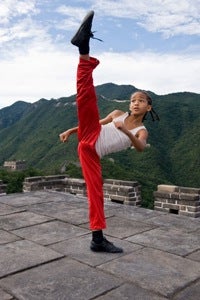 Variety reports that this week will be the last ShoWest – next year the National Association of Theater Owners, which currently produces the convention in association with a company from Nielsen Business Media, is taking over the event by itself, moving from the Paris and Bally’s hotels to Caesars Palace, and renaming it CinemaCon. The idea is to turn the event nonprofit in an attempt to entice more participation from studios, who’ve been shying away from full-fledged presentations and going for quicker, cheaper screenings of a movie or two.
In other words, just because Disney is showing “Toy Story 3” and Sony is unveiling “The Karate Kid” (whose star, Jaden Smith, left, is not coincidentally getting an award the same day of the screening), doesn’t mean those studios are doing official presentations; Warner Bros. is the only studio going that route, which isn’t good enough for a convention that wants to be the must-attend event for the exhibition community. (Variety)
News from ShoWest: Fandango is now offering Mobile Ticket, which lets you send movie tickets straight to a cell phone; the barcodes will display on the phones and can be scanned by ticket-takers. Sounds convenient, if you live in the eight markets and frequent the 18 theaters where it’s being tested. Those locations include half a dozen in New York City, four in Hawaii, a couple in Texas and a few in California – for some reason, not including Los Angeles. (PR Newswire via Yahoo! Finance)
Jay A. Fernandez ponders the South by Southwest dilemma: How can it be a cool, low-key, indie festival when it’s also trying to attract increasing numbers of buyers and be a launching pad for acquisitions and distribution deals? One answer: Despite the presence of buyers from Sony Pictures Classics, Apparition, Magnolia, IFC Films, Roadside Attractions and Initiative, those deals aren’t really going to happen for the most part. Hence, SXSW is still cool and indie. (The Hollywood Reporter)
Brooks Barnes looks at the bad news Disney delivered to Robert Zemeckis last week: Sorry, but James Cameron has made your beloved motion-capture technique look a bit, shall we say, old-fashioned. With the “Avatar” biz booming and “Disney’s A Christmas Carol” underwhelming at the box office, Disney decided it didn’t need Zemeckis’ ImageMovers Digital, which was supposed to have represented, in the words of former Disney chief Dick Cook, “the future of motion pictures, especially as it pertains to the creativity and technology of motion capture and 3-D film experiences.” A
s it turns out, “Avatar” kind of made Zemeckis’ approach look like the past — and with Cook out, Disney’s legendary frugality reared its ugly head. Unfortunately, at least to my way of thinking, they didn’t pull the plug in time to stop Zemeckis’ potentially gruesome motion-capture remake of “Yellow Submarine.” (Media Decoder)
David Poland receives an anonymous memo from what looks to be a Variety insider talking about the company’s layoff process, and painting the cuts – the latest of which took film critic Todd McCarthy, among others – as an attempt to reshape the failing trade by a couple of the top dogs. Assuming that the take is fairly accurate, the details are scary, and one stat is pretty sobering: “It’s interesting that Variety has many more editors than reporters now.” (The Hot Blog)
“Avatar” producer Jon Landau tells a press conference in Tel Aviv that the next movie he and James Cameron make will definitely be in 3D – that, in fact, he doesn’t envision ever making another 2D movie, because he foresees all screens (film, TV, computers, even mobile devices) being 3D before long. And as for losing to that little movie at the Oscars, you might guess that $2 billion in box office receipts eases the pain a bit: "We made ‘Avatar’ to communicate to the masses, not to please 6,000 Academy members." (Reuters)

Anne Thompson says the first hit out of SXSW is “Cold Weather” from “Quiet City” and “Dance Party, U.S.A.” director Aaron Katz. She didn’t see it, mind you, but Jason Reitman showed her the trailer on his iPhone, and others have raved. (It “adapts multiple cliches and overcomes all of them to reach a greater significance,” says IndieWire’s Eric Kohn, while Karina Longworth opines, “Nobody does unspoken tension and unforced sensuality quite like Aaron Katz.”) Does that mean it’s going to be a hit? Not quite. But it should land distribution, at least. (Thompson on Hollywood)