In this morning’s roundup of movie news ‘n’ notes from around the web, “Avatar” undergoes financial scrutiny, while Spider-Man and his pals hit the courts.

Bloomberg runs the numbers and decides that News Corp. will make $350 to $400 million from “Avatar.” If the company hadn’t gone to outside investors to lessen their risk on the hugely expensive production, it could have been significantly higher. (Bloomberg) Then David Poland examines Bloomberg’s numbers and comes away with this: “$511 million for Fox,  $375m for Jim Cameron,  $354m for the 2 funding companies.” One hell of a lot of money, however you add it up. (The Hot Blog) 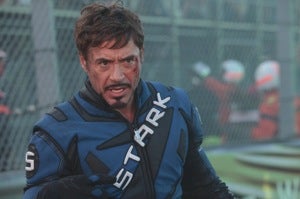 The heirs of comic book artist Jack Kirby have sued Marvel Comics – and the result could lead to competing versions of “Spider-Man” and “X-Men,” though it’s probably impossible to overestimate how hard Sony’s and Fox’s lawyers will work to keep that from happening. At issue is exactly who controls Kirby creations (and co-creations) like Spidey, the X-Men, Iron Man (left) and the Incredible Hulk; Kirby’s kids say they do, while Marvel insists those comics were work-for-hire and thus the company controls the copyright. This one’s been rattling around in the courts for a few months: the heirs sent notices of termination to Marvel, Disney and several other studios last fall, while Marvel sued the Kirby family earlier this year. The Hollywood Reporter has the details, and a copy of the lawsuit.

Exhibitors gathered at ShoWest are facing shrinking theatrical windows, the challenges of adapting to 3D and digital projection, questions about pricing – so Sony’s Michael Lyton goes to Vegas to make the keynote speech and winds up talking about … movie theater snacks? Yep. Movie City Indie has the release, in which SPE chairman and CEO Lyton suggests not that theaters give up candy and popcorn, and not that they bring in tubs of broccoli or “40-ounce cups of prune juice,” but that they consider things like fruit, veggies, granola bars and yogurt. But he doesn’t say anything about making more nutritious, healthier movies.  (Movie City Indie)

Patrick Goldstein looks at the “prolonged losing streak” at Universal Pictures, and wonders if the studio will ever get itself back on track. At least he wonders that for about two or three paragraphs, before his piece turns into a look at the film that he thinks might turn Universal around: the remake of “The Thing.” When you’re pinning all your hopes on a prequel to a 28-year-old remake of a 59-year-old horror movie, things are looking pretty dire. (The Big Picture)

Are film festivals really of any importance? Film School Rejects ponders “the chasm that exists between understanding film as a product to be sold and film as an art form to be enjoyed,” and decides that chasm is at the heart of most festivals, crammed as they are with films destined never to reach the multiplexes. “This year at SxSW,” writes Cole Abaius, “just like others, will see larger films swim through on their way to the box office, a handful of smaller films get picked up for NY/LA weekend trips, and a huge swath that are championed into the void.” But you know, he doesn’t necessarily think that’s a bad thing. (Film School Rejects)

A little touch of Good Morning, Oscar: show co-producer Bill Mechanic talks about the ceremony to KCRW’s “The Business.” There was a moment where you’re about an hour into the show and all of a sudden you’re starting to do three or four awards in a row and you think, oh, it’s just an awards show.” No kidding. (/film)