In this morning’s roundup of movie news ‘n’ notes from around the web, ‘Alice’ prompts a film-business fantasy, and another writer learns the reality of studio accounting.

“It’s becoming increasingly clear that Disney’s March 5 release of ‘Alice in Wonderland’ may have helped trigger a dramatic tipping point in film history,” says Patrick Goldstein. The release, he says, may mark the end of theater owners’ resistance to shorter DVD windows, because the three-month window that Disney announced for “Alice” (below) obviously didn’t keep people from seeing the film in theaters. If that seems a bit overly optimistic – one big movie is not going to stop exhibitors from complaining about shrinking windows – Goldstein’s dream scenario of a “bold experiment” that ought to be tried is even more of a pipe dream. He envisions a future film like “The Bounty Hunter” or “Shutter Island” being released day-and-date in theaters and on video-on-demand … with the VOD price coming at a premium (he suggests $22.95), part of which the studio would then share with theater owners. Sounds like a fantasy to me, and I’m not talking about a film genre. (The Big Picture) 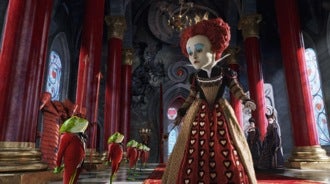 This one’s firmly in the dog-bites-man camp: author Michael Connelly has sued Paramount Pictures, claiming that the studio falsely inflated development costs for two of Connelly’s novels that were optioned by the studio but never made into films. The complaint centers on a 15-year option to make movies out of “Black Ice” and “The Black Echo”; the option was to have lapsed in January, giving Connelly the right to buy back the rights for Paramount’s development cost plus interest. But those costs, he says, were improperly inflated without documentation. People who’ve followed Hollywood’s accounting practices over the years are said to be shocked. (THR, Esq.)

What do we know about “How Do You Know”? Not much, says the New York Times of James L. Brooks’ upcoming film, which may well be a dramedy about a female softball player with Reese Witherspoon as the softballer and Owen Wilson as a professional baseball pitcher. Other details are hard to come by, but the upshot is that “How Do You Know,” due out from Sony at the end of the year, is the kind of film that studios have been avoiding lately: an expensive, adult, star-driven story featuring a variety of actors who don’t come cheap: Witherspoon, Wilson and Jack Nicholson among them. Can the man whose last film was the notably unsuccessful “Spanglish” overcome what the Times calls “Hollywood’s skittishness about relying on sophisticated pictures from even the biggest stars?” “Who the Hell Knows?” might be a more appropriate title. (The New York Times)

The Wall Street Journal says that the big story out of the South by Southwest festival was that it’s gotten really crowded. It strikes me that this is the story of every festival, pretty much all of which are full of people complaining that the fest used to be much cooler when it didn’t attract so many people. But between the 33 percent increase in film festival attendance over last year (11 percent for the more-established music festival), and the presence of high-profile debuts like “MacGruber” and “Kick-Ass,” Eric Kohn says long lines and big crowds were the talk of the town. (Speakeasy)

The Tribeca Film Festival announces yet another of its programs, this one called Tribeca All Access, an initiative created to “cultivate relationships between filmmakers from traditionally underrepresented communities and film industry executives.” Peter Knegt has the list of the 24 filmmakers invited to participate, out of a pool of more than 450 submissions. (indieWIRE)