In this morning’s roundup of Oscar news ‘n’ notes from around the web, “The Hurt Locker” starts winning awards, and the new Carpetbagger talks to Steve Martin’s sidekick, Alec Baldwin.

The movie that isn’t eligible for the west coast-based independent film awards was the big winner at Monday night’s east coast-based independent film awards. “The Hurt Locker” won the best feature award at the Gotham Independent Film Awards, which are handed out by the Independent Filmmaker Project (IFP) and are a significantly smaller affair than the L.A.-based Independent Spirit Awards. “The Hurt Locker,” which was nominated for two Spirit Awards last year and is ineligible this year, also won the Gotham award for best ensemble performance. “Food, Inc.” won the best documentary award, Robert Siegel the breakthrough director award for “Big Fan,” Catalina Saavedra the breakthrough actress award for “The Maid,” and “You Won’t Miss Me” was named “The Best Film Not Playing at a Theater Near You.” The name of that last award, by the way, is trademarked. (Gotham Independent Film Awards)

Melena Ryzik makes her first post as the Carpetbagger, the New York Times’ awards blog begun four years ago by David Carr. In her new job, she goes to the Gotham Awards and runs into Alec Baldwin, who tells her that he’ll be “under Steve Martin’s wing” when he co-hosts the Oscars in March. He also says he’ll “keep a certain amount of dignity.” Unlike her predecessor, the new Bagger mostly keeps things low-key. (The Carpetbagger) 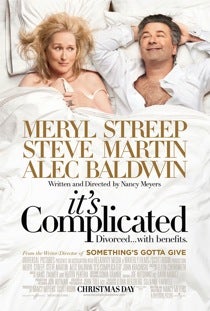 Baldwin, meanwhile, has a lot more to say to Men’s Journal, where he pretty much trashes his entire film career: “Movies are a part of my past … I consider my entire movie career a complete failure … Every movie I’ve been in, I just avoid.” He also threatens to retire, not for the first time. I know that in some circles the guy is considered a supporting-actor shoo-in for “It’s Complicated,” but is this any way to campaign for an Oscar? I don’t know, maybe he’s trying to lower expectations so much that viewers (and voters) will be surprised by the Nancy Meyers film, or at least by his performance in it. (TheWrap)

While rounding up recent interviews with Jason Reitman on Monday, I missed Anne Thompson’s talk with Reitman – maybe because it took place not in an airport or an airport hotel (that was the New York and L.A. Times’ thing), but after a screening of “Up in the Air” at her UCLA Extension “Sneak Previews” class. Reitman says that St. Louis was the best airport to shoot footage of George Clooney, and Las Vegas wasn’t so good. He also says only three journalists have asked him about his pie chart that compiles journalists’ questions. That’s odd; I’d think that everybody would ask him about the chart these days. (Thompson on Hollywood)

Tom O’Neil has a feeling that Mo’Nique’s lock on the supporting-actress award may not be as thorough as people think, and that voters may find it hard to embrace such a monstrous character. He figures an upset could be in the making from the likes of Julianne Moore (“A Single Man”) or one of the “Up In the Air” duo of Anna Kendrick and Vera Farmiga. (Gold Derby)

Pete Hammond pulls out another of the trial balloons he loves to float this time of year. In this case, it’s the idea that the late Roy Scheider could get an acting nomination for “Iron Cross,” a film that marks his last screen performance, but one that is still seeking distribution. Director Joshua Newton, he says, is rushing to finish the movie in time for a one-week qualifying run at Laemmle’s Town Center in Encino, and he’s convinced the film’s backers to spring for a near-half million dollar ad campaign of trade ads and screener mailings. Even Gregory Gardner, the Laemmle staffer who helps filmmakers book his theater for Oscar-qualifying runs, admits that that the strategy (one week in an out-of-the-way theater) generally just works in the documentary categories … but hope, as they say, springs eternal. (Notes on a Season)