Fox showed “Avatar” to people. Most of them liked it. Lots more on this later. (TheWrap)

Both Timeses, New York and Los Angeles, love “Invictus.” On the East Coast, A.O. Scott raves about the film and casts it as another film about Clint Eastwood’s favorite subject: revenge. “Potent, intelligent filmmaking,” he says. (New York Times)  Out west, meanwhile, Kenneth Turan calls it “a stirring drama … blending entertainment, social message and history lesson in a way that recalls such decades-old films as ‘The Story of Louis Pasteur,’ ‘The Life of Emile Zola’ and ‘Dr. Erhrlich’s Magic Bullet.’” (Los Angeles Times) 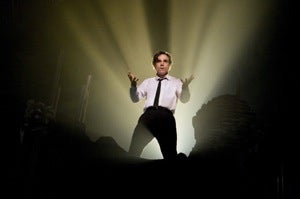 “The first way to kill an actor is to make him talk about the acting,” says the Guardian, which then proceeds to talk to Daniel Day-Lewis (in "Nine," left) about acting. “If you go to inordinate length to explore and discover and bring a world to life, it makes better sense to stay in that world rather than jump in and out of it, which I find exhausting and difficult,” he says, explaining why he stays in character during film shoots.

Kris Tapley surveys the Oscar original-song category, and identifies the main contenders: “The Weary Kind” from “Crazy Heart,” material from “The Princess and the Frog” and “Nine,” two retro tracks from “An Education,” and songs by Mary J. Blige, Paul McCartney, Leona Lewis, U2 and Karen O from “Precious,” “Everybody’s Fine,” “Avatar,” “Brothers” and “Where the Wild Things Are,” respectively. What the Academy’s curious nominating process will make of this field is anybody’s guess. (In Contention)

Anne Thompson asks a question with big implications for “Star Trek,” “District 9” and “Avatar”: will the Academy take science-fiction films seriously? She seems pessimistic about the first two of those films breaking into the best-picture race, but says that “Avatar” could turn the trick if it comes across as a game-changer. (Variety)

He said, she said: Thompson and Movieline’s Jack Matthews argue about whether “Precious” will figure prominently in the best-picture race. She thinks it will, but he’s not so sure. (Thompson on Hollywood)

Director Rod Lurie, currently in post-production on his new version of “Straw Dogs,” tells Jeff Wells that he thinks Kathryn Bigelow will win the best-director Oscar for “The Hurt Locker,” becoming the first woman to take home that prize. (Only three women have even been nominated.) (Hollywood Elsewhere)   Greg Ellwood, meanwhile, wonders if the best-director race will come down to Bigelow vs. her ex-husband, “Avatar” director James Cameron. (Awards Campaign)