In this morning’s roundup of Oscar news ‘n’ notes from around the web, the Oscar producer hires some dancers, and Roger Ebert surveys the critics’ awards.

Oscar producer Adam Shankman, who’s been promising that he’ll only have dance numbers on the Academy Awards show if they make sense, now says he’s going to give “the top guy and girl” on “So You Think You Can Dance” jobs on the Oscars. He’s doing this because he got his own "first big job" dancing on the Oscars 20 years ago.  I guess that settles the question of whether he’s going to have dance numbers on his show … unless he’s planning to make the "SYTYCD" winners seat-fillers or something. (TwitLonger) 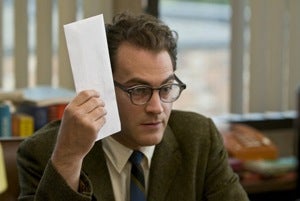 The Santa Barbara International Film Festival adds four more honorees to its jam-packed slate: Carey Mulligan, Saoirse Ronan, Gabourey Sidibe and Michael Stuhlbarg will all receive the Chopin Virtuoso award on February 7.  I don’t see how you can argue with any of those awards – even if at least one of them (most likely Stuhlbarg, left) will probably be left out of the Oscar nominations earlier in the week. (Santa Barbara International Film Festival)

Roger Ebert looks at Sunday’s critics awards and says they’ve anointed “The Hurt Locker,” Kathryn Bigelow, Jeff Bridges, Meryl Streep, Mo’Nique and Christoph Waltz as Oscar frontrunners. Monday’s New York Film Critics Circle announcement may alter the picture somewhat – it’s rare that the New Yorkers opt for the same film as their L.A. counterparts, and they seem to be the last best hope for the Coen Brothers’ “A Serious Man” – but you can’t argue with the fact that Waltz, Mo’Nique and Bigelow did pick up some significant momentum over the weekend. (Chicago Sun Times)

Frank Rich explains why “Up in the Air” adds up to a lot more than just a movie about a guy who loves to fly and has trouble with personal connections. Dubbing the film “Hollywood’s Brilliant Coda to America’s Dark Year,” he says it “captures the distinctive topography of our Great Recession as vividly” as “The Grapes of Wrath” did 70 years ago. If it wins Best Picture, it’ll be because Oscar voters either read and agree with Rich, or they didn’t read him but they agree anyway. (The New York Times)

Tom O’Neil hears about trouble at Academy screenings of "Invictus" and "Nine" — namely, a rain-induced blackout that halted the afternoon AMPAS members screening of the former film, and caused the cancellation of the latter one’s scheduled evening showing.  With the December weekend screening schedule set, there won’t be room to rebook prime weekend showings — though the two films are clearly more obvious Oscar bait than, say, most of this coming weekend’s slate, which consists of "Creation," "Sherlock Holmes," Alvin and the Chipmunks: The Squeakquel" and "Did You Hear About the Morgans?"   (Gold Derby)

Kris Tapley and Anne Thompson talk about the week in Oscar. Given the week in question, that means they talk about “Avatar.” Kris thinks it’s a definite best picture nominee “ based on what it’s done for the industry.” Anne agrees. “Based on this movie,” she says, “you can do anything with movies now.” (In Contention) (Thompson on Hollywood)

In Sunday’s New York Times, Manohla Dargis looks at the four high-profile films (“The Hurt Locker,” “Julie & Julia,” “An Education” and “Bright Star”) directed by women, but says the more you look at the real state of female directors in Hollywood, “the worse the numbers get.” She tries to figure out why Michael Mann gets steady work when Kathryn Bigelow goes eight years between films, and why other once-prominent female directors have fallen off the map.

Scott Feinberg updates his Oscar charts. “The Hurt Locker,” “Up in the Air” and “The Messenger” move up. (And the Winner Is … )

David Poland surveys the terrain “14 weeks to Oscar,” a time when he thinks the season just got interesting. His theme is “Avatar,” his conclusion that it’s a sure nominee and a possible winner. But he also thinks that “The Hurt Locker” could be “the muscular little serious period movie, like ‘Gandhi’ or ‘Chariots of Fire,’ which could topple the big boy.” Period movie? I know it’s set a few years ago, but really? (Movie City News)