In this morning’s roundup of Oscar news ‘n’ notes from around the web, campaigning turns ugly, Globe snubs dissected, and Jason Reitman finds inspiration in the strangest places.

OMG lists 11 Golden Globes “snubs.” I always thought you had to be considered a favorite for your absence to constitute a snub, but they start with Brad Pitt for “Inglourious Basterds,” include Nicolas Cage for “Bad Lieutenant” and Adam Sandler for “Funny People” and then move on to the films they think were snubbed in the Best Motion Picture – Comedy or Musical category, including “I Love You, Man” and “Michael Jackson’s This Is It.” The Jackson film, incidentally, was not eligible in that category. Their reasoning is that “This Is It” is so fabulous that the Globes should have made an exception. Yes, that’s really their argument.

Nikki Finke says negative Oscar campaigning has begun, and that Harvey Weinstein is a prime target. I don’t quite know how to take this; I mean, her newfound role as the arbiter of civility in Hollywood is making my head spin. (Deadline Hollywood) 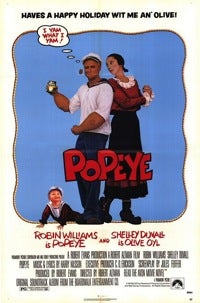 “Up in the Air” director Jason Reitman is working as a music blogger for the L.A. Weekly for one week. He starts by talking about the soundtracks that influenced him early in his life. “The first soundtrack I ever obsessed over,” he says, was to the Robert Altman movie “Popeye” (left). Yikes. And yet, against all odds, the guy went on to assemble some pretty cool soundtracks on his own. Go figure. (West Coast Sound)

The Envelope looks at Sandra Bullock’s Oscar chances. More intriguing than the story, perhaps, is the headline that they use on the cover of the site’s print edition: “Can Oscar finally embrace Sandra Bullock, along with her earnest hit ‘The Blind Side’?” That “finally” implies that she’s overdue, though you’d be hard-pressed to find many other Bullock performances that were ever considered contenders … while calling the film “earnest” has a tinge of condescension to it. Hmm … (Los Angeles Times)

Eric Childress asks what the Golden Globes mean for the Academy Awards. He runs the numbers, category by category, and decides that there will definitely be an overlap (no kidding), but it probably won’t be anything too dramatic. (Cinematical)

Armond White hates “Avatar.” This devastating blow is slightly lessened by the fact that the New York Film Critics Circle chair hates virtually every film that most other critics love. This particular review does what many of his reviews do: it takes a movie that has garnered rave reviews and compares it, unfavorably, to another movie that nobody else liked (in this case, “Transformers: Revenge of the Fallen”). Go ahead, look up “contrarian” in the dictionary … (The New York Press)

The Palm Springs International Film Festival announces its lineup of galas, premieres and special programs.  "The Last Station" will kick things off on January 7, "The Lightkeepers" will wind things up on the 17th, and in between the festival will show quite a few of the entrants in the Oscar foreign-language category, including Mexico’s "Backyard," Poland’s "Reverse," Chile’s "Dawson, Island 10" and Finland’s "Letters to Father Jacob." (PSIFF website)