In this morning’s roundup of Oscar news ‘n’ notes from around the web, Quentin Tarantino shows his influences, and Mo’Nique reveals her secret campaign weapon.

Anne Thompson picks her favorites from among the 63 songs eligible for the Oscar. She goes for a They Might Be Giants and Jarvis Cocker ditties from “Coraline” and “Fantastic Mr. Fox,” a Duffy ballad from “An Education,” Ryan Bingham’s and T Bone Burnett’s resonant theme from “Crazy Heart,” a bouncy Karen O song from “Where the Wild Things Are,” and that big Leona Lewis ballad at the end of “Avatar.” I’m betting two or three of those are too light for the Academy, though you never know with the music branch. She concludes, “If ‘Colorblind’ from ‘Invictus’ gets nominated, I’ll eat my hat.” I’ve never seen Anne wearing a hat, but I know exactly what she means. (Thompson on Hollywood) 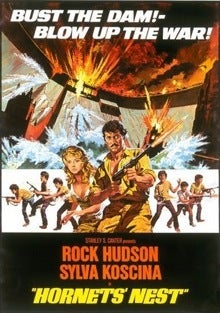 Film School Rejects goes to Quentin Tarantino’s DVD release party for “Inglourious Basterds,” and collects the trailers that Tarantino showed (from his own collection) to document some of the films that influenced “Basterds.” They include “The Dirty Dozen,” “Play Dirty,” “Tobruk,” “The Five Man Army,” “Hornet’s Nest,” “Kelly’s Heroes,” “The Big Red One,” “Kill Them All and Come Back Alone” … and, oh yeah, that 1977 film called “The Inglorious Bastards.”

After the Golden Globe nominations, reluctant awards campaigner Mo’Nique gets on the phone with the Baguette (i.e., Paula Schwartz, from the New York Times’ Carpetbagger blog) and discusses her campaign strategy, which pretty much boils down to “go on ‘Oprah.’” You know, she may have a point. (The Carpetbagger)

Movieline looks at Mo’Nique’s strategy (the not-doing-very-much part, not the going-on-“Oprah” part) and decides they like it. “She’s the prototype for how awards campaigns should be done in 2009 and beyond,” insists S.T. VanAirsdale. But will it work for future contenders who haven’t won every critics’ award under the sun?

The rave review he wrote on December 11 apparently wasn’t enough, so Roger Ebert returns to the subject of “Avatar” to gush a little more: “James Cameron set out to do a lot of very difficult things and to do them all correctly. It took him and his many collaborators a long time and a lot of money, but how many filmmakers could have done it at all?”  (Chicago Sun  Times)

USA Today chimes in on James Cameron’s film as well. “Weak script?” begins Claudia Puig’s headline. “No one will care when ‘Avatar’ looks so good.” Well, I cared, but I’m clearly in a very small minority.

Kris Tapley shows what he’d do if he had an Oscar ballot. If he did, and if everybody else in the Academy thought the same way he did, “Avatar” would be the leader with 10 nominations, followed by a three-way tie between “An Education,” “Precious” and “Antichrist.” It’s safe to say that the Academy will not follow his lead, except for that “Avatar”-getting-the-most-nominations thing. (In Contention)

Little Gold Men takes Matt Damon’s South African accent from “Invictus,” and puts it up against Leonardo DiCaprio’s from “Blood Diamond.” Perhaps, surprisingly, their expert (a lawyer from Johannesburg) gives the clear edge to Leo. Then they get a Bostonian to judge the actors’ Boston accents in “The Departed” – and once again, Damon goes down to defeat. Considering the guy is from Boston, that second loss must hurt. (Vanity Fair)