In this morning’s roundup of Oscar news ‘n’ notes from around the web, everybody loves “Avatar,” but “There Will Be Blood” is the best of the decade.

Like almost everybody else, the New York Times adores “Avatar:” “a trippy joy ride about the end of life — our moviegoing life included — as we know it.” Manohla Dargis says that movies had been missing awe, something that James Cameron has “returned to the screen with a vengeance.” And she glosses over the deficiencies in the script because, she says, “the movie’s truer meaning is in the audacity of its filmmaking.” (New York Times) 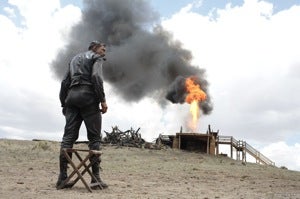 2009 Top 10 lists are child’s play – but how about Best of the Decade lists? Gawker assembles all the ones they could find, gives points for every inclusion, and comes up with the ultimate Tops of the ‘00s list. “There Will Be Blood” winds up in the top spot with 12 different mentions on the various lists, followed by a tie between “Eternal Sunshine of the Spotless Mind” and the “Lord of the Rings” series. Also doing well: “No Country for Old Men,” “Memento” (which Gawker insists on calling “Momento”), “Brokeback Mountain,” “The Dark Knight,” “Almost Famous,” “Catch Me If You Can,” “Pan’s Labyrinth” and “Wall-E.” Gawker’s Richard Rushfield also comments, “Perhaps the most discussed filmmaker of the decade, Roger Moore, barely registers, getting just two votes for ‘Farenheit 9/11’ and one for ‘Bowling for Columbine.’” I think me means Michael Moore … but, you know, it’s been a long week. (Gawker)

Those little bitty costumes in “Fantastic Mr. Fox” may be pretty nifty, and quintessentially Wes Anderson-ish, but they’re not going to win an Oscar nomination. That’s Anne Thompson’s conclusion as she looks into the matter of the stop-motion film’s costumes, for which no designer is credited. It turns out that Anderson designed them all himself, and then used seamstresses to sew them. “[T]hat’s not going to sit well with costume designers in the Academy,” she says. The “Mr. Fox” screeners that Fox Searchlight sent to Academy members, by the way, list the responsible parties in a dozen “for your consideration” categories, including art direction, but they do not mention costume design. (Thompson on Hollywood)

David Poland surveys the field “13 Weeks to Oscar,” and says that the past week’s barrage of nominations and critics awards narrow the field for Oscar voters, but in the end nobody can predict how it’s all going to play out. He also finds it an awards season with a notable “lack of backbiting,” despite insinuations of dirty campaigning in other circles. (Movie City News)

In his “Tech Support” column, Kris Tapley interviews the cinematographer, editor and costume designer of “Up in the Air.” They, and director Jason Reitman, talk about the secret plan for the film: to show you the world through the eyes of George Clooney’s character at the beginning of the movie, but the world as it really is by the end. (In Contention)