In this morning’s roundup of Oscar news ‘n’ notes from around the web, Santa Barbara and Palm Springs festivals choose sides in the best-actress race.

It’s awards season, and the awards are starting to pile up as . For starters, Norman Jewison is named the recipient of the Directors Guild’s Lifetime Achievement Award, the highest honor bestowed by the DGA at its annual awards ceremony. (TheWrap) And Helen Mirren gets the Career Achievement Award at the Palm Springs International Film Festival, whose chairman, Harold Matzner, says “The Last Station” contains “another fine performance” from the actress. (The Hollywood Reporter) 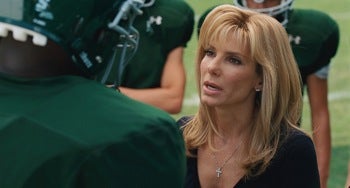 But when it comes to praise from a festival honcho, those words pale in comparison to the kudos Sandra Bullock gets from the Santa Barbara International Film Festival, where she’ll receive something called the American Riviera Award Presented by Chopin. (That’s Chopin Vodka, not Frederic Chopin.) Festival director Roger Durling says her “career-capping performance in ‘The Blind Side’ encompasses everything we have loved about her since the early ‘90s …. ” All right, already: I will stifle my skepticism and go see the movie, finally. (Santa Barbara International Film Festival)

David Ansen talks to Jason Reitman and thinks “Up in the Air” might be just what the Academy ordered when they went to 10 best-pic nominees. (Newsweek)

The new Carpetbagger follows her first print column with her first video, with an assist from the old Carpetbagger. She goes to Times Square and finds a woman who’s still mad at the Academy for picking Julia Roberts over Ellen Burstyn in 2001. (The New York Times)

David Poland considers the Independent Spirit Award nominations and tries not to let his “institutional disdain” get in the way.  (The Hot Blog)

Kris Tapley sits down with Jeff Bridges and talks about everything from “Crazy Heart” to “Starman” to “The Big Lebowski.” Bridges also admits that no, he wouldn’t mind winning an Oscar. (In Contention)

Scott Feinberg moderates a Q&A with “Hurt Locker” stars Jeremy Renner and Anthony Mackie, and makes the audio available on his website: bomb suits, makeshift latrines, “ninja cameras,” etc. (And the Winner Is … )

“Oscars snub Miley Cyrus again,” headlines Tom O’Neil. His story, though, points out that the “snub” is nothing of the sort – it’s just that the song she co-wrote in the “Hannah Montana” movie isn’t eligible for a best-song Oscar nomination because it wasn’t written specifically for the film, and that Cyrus didn’t have a hand in writing the song that is being submitted. (Gold Derby)

Anne Thompson talks to one of the more surprised Spirit Awards nominees, Lee Toland Krieger, whose movie “The Vicious Kind” doesn’t have a distributor but now has nominations for Best Screenplay and Best Male Lead (Adam Scott). The surprised Krieger says he was aiming to make a transgressive film, not a typical part of what he calls “the Indiewood movement.” (Thompson on Hollywood)