In this morning’s roundup of Oscar news ‘n’ notes from around the web, “Avatar” moves up, “Nine” moves down, and Tilda Swinton might be moving in.

Dave Karger wonders if the negative reviews from prominent critics will keep “Nine” from winning the Golden Globe for comedy or musical film, an award it once seemed all-but-certain to take home. “Will the Globes voters want to risk being seen as mere star worshipers by anointing a film that was so savaged by the country’s leading critics?” he asks. Well, it’s hard to underestimate the Hollywood Foreign Press Association, but he could have a point. If the Globes look elsewhere, Karger thinks “(500) Days of Summer” is the film that could score an upset. (Oscar Watch) 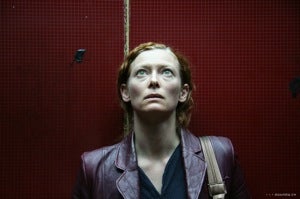 Sasha Stone looks at the critics awards Tilda Swinton is picking up for “Julia,” and decides the British actress “is probably going to get” an Oscar nomination. But at whose expense? Stone figures that Meryl Streep, Carey Mulligan, Gabourey Sidibe and Sandra Bullock are locked in, and decides that a Swinton nomination will come at the expense of Helen Mirren, Emily Blunt, Abbie Cornish or Marion Cotillard. I suspect that because Mirren’s film (“The Last Station”) will be so much more widely seen than Swinton’s, and because it’s such an Academy-friendly kind of movie, the critics won’t be enough to push Swinton into the category. (Awards Daily)

Pete Hammond says that “Avatar” is the new best picture frontrunner. He bases this conclusion on the Academy members screening that the Odds reported about Monday morning, as well as its robust boxoffice figures. (Notes on a Season)

Anne Thompson tracks down the mystery man who’s been posting on Twitter under the name James F—ing Cameron. Typical tweet: “I’m typically a modest person, but all of these great reviews are on the mark. I made a fantastic film, and it really shows.” Turns out it’s an “occasional journalist” based in Los Angeles with the last name Litcofsky, and he’s not even a particularly avid Cameron fan. He liked the second half of “Avatar,” but not the first. (Thompson on Hollywood)

Speaking of tweeters .. Yes, there will be dancing: Oscar show co-producer Adam Shankman tweeted that dance fans should be on the lookout for auditions He also says the Oscars are so inspiring that he “can’t stop choreographing.” Uh-oh. (Twitter)