In this morning’s roundup of Oscar news ‘n’ notes from around the web, “The Hurt Locker” just keeps on winning, and James Cameron tries to coin a catchphrase.

The annual Village Voice poll of movie critics is out, and “The Hurt Locker” is on top. The rest of the top 10, in order, is “Summer Hours,” “A Serious Man,” “Inglourious Basterds,” “35 Shots of Rum,” “The Headless Woman,” “Police, Adjective,” “Fantastic Mr. Fox,” “Two Lovers” and “Up.” Jeremy Renner and Tilda Swinton landed best actor and actress honors … and if you’ve been paying attention to just about any award given out this so far this year, you know who won best supporting actor and actress. (Initials C.W. and M’N.) Back in my rock critic days, the Village Voice music poll was the Big One – but that was a different era and a different Voice. The movie poll is skimpy compared to that one, but it strikes a balance between arty and mainstream. (Village Voice) 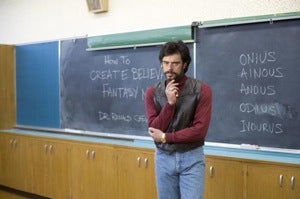 In honor of the late film critic Manny Farber, R. Emmet Sweeney offers five nominations in the category of “most subversive performances of 2009.” Though he’s not quite sure exactly what “subversive” should mean in this context, he suggests that these performers are it: Michael C. Hall in “Gamer,” Kathryn Hahn in “The Goods: Live Hard, Sell Hard,” Jemaine Clement in “Gentlemen Broncos” (left), Laurence Fishburne in “Armored” and Bill Murray in “Zombieland.” I don’t know about subversive, but that last one, at least, is a hoot. (ifc.com)

Is “Avatar” being incorrectly projected in its IMAX 3D showings? Jeff Wells hears from a reputable “tech guy” who says that he saw an out-of-sync digital print of the film in Universal City, and then spoke to an IMAX rep who says that out-of-date equipment means that virtually all the company’s digital projectors show 3D films one-third frame out of sync. Apparently you can’t really tell except during fast lateral motion. And apparently the only way to see “Avatar” the way James Cameron intended is with film prints, of which very few exist. I can’t vouch for any of this, but it sounds scary. (Hollywood Elsewhere)

Erik Davis wonders if the line “I see you” from “Avatar” will become a new catchphrase on the level of “you complete me” from “Jerry Maguire.” James Cameron, he says, “wants this film to define an era, and ‘I see you’ was not just another random line of dialogue – it was created for you to use as a pick-up line, during a wedding proposal or as part of several spoof videos and movies in the years to come.” My answer to Davis’ question: uh, no. A great many things about “Avatar” will be remembered for years, but I’d say that the dialogue is not one of them. (Cinematical)

Movie City News starts to aggregate Top 10 lists. So far they’ve got 29 of them … and so far, to the surprise of absolutely no one, “The Hurt Locker” stands atop the heap, with a sizeable lead over “A Serious Man” and “Up in the Air.” “Avatar” is down at number 16, just below “Anvil!” (MCN Top 10 Scoreboard, Individual Lists)

Patrick Goldstein looks at the plaudits Jeff Bridges has been receiving for “Crazy Heart,” and suggests that director Scott Cooper deserves some kudos of his own. He talks to Cooper, who says he wanted the film to have “the same rhythm and feel as a George Jones song.”  (The Big Picture)