In this morning’s roundup of Oscar news and notes from around the web, test your Oscar knowledge while both Timeses examine those “Avatar” 3-D glasses.

Sasha Stone offers a tricky nine-question Oscar quiz. For example: which director won four out of the five Oscars for which he was nominated? Off the top of my head, I’d say I know numbers one, two, three, six, and 9a and b, and think I know a couple others. But most of them take some thinking. (Awards Daily)

Get the Big Picture picks the 10 best performances of 2009. For the most part, the list is made up of the usual suspects (Mo’Nique, Waltz, Mulligan, Renner, Bridges, Sidibe), along with a couple of awards longshots, most notably Sharlto Copley from “District 9” (below).  Don’t hold your breath waiting for a nomination there, but it’d be a delicious surprise if it happened …. (Get the Big Picture) 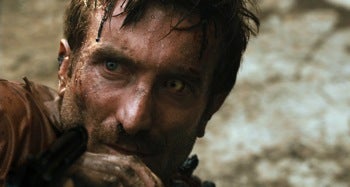 Not to be outdone, Scott Feinberg offers up no less than 50 performances that should have received more awards attention than they have. His list ranges from ones I can wholeheartedly endorse (Viggo Mortensen in “The Road,” Alfred Molina in “An Education,” Ben Foster in “The Messenger,” Copley again) to at least one that just plain scares me (Jae Head, the annoying kid in “The Blind Side”). (And the Winner Is … )

Which theaters offer the best “Avatar” experience? At the L.A. Times, Mark Milian looks into the three competing 3-D technologies, and concludes that the Imax 3-D version provides the most intense way to see the movie, RealD has the best glasses, and Dolby 3-D is the least impressive, with “annoying” glasses. As for regular ol’ 2-D? Don’t even consider it. (The Hero Complex)

The New York Times, meanwhile, takes a business slant on the same story, detailing the battle between four different companies for supremacy in the 3-D market. It turns out that RealD glasses cost about 65 cents each, while Dolby’s versions cost about $28 dollars and XpanD glasses (used at the Arclight’s Cinerama Dome theater) can go for as much as $50. (New York Times)

Film Misery looks at the negative reviews and lackluster boxoffice for “Nine,” and wonders: if that film drops out of the best-picture lineup, which one takes its place? Their “out on a limb” prediction: “Star Trek.” With “Avatar” representing for big-budget blockbusters everywhere, I’d go for something smaller, maybe “The Last Station” or “The Messenger.” (Film Misery)