In this morning’s roundup of Oscar news and notes from around the web, Globe presenters, vulnerable best-picture candidates, and another “Avatar” controversy.

The Golden Globes announce three more presenters: Halle Berry, Colin Farrell and Matthew Fox. That makes six so far. The Globes have 25 categories, so we’ve got quite a few presenters to go. (Hollywood Foreign Press Association)

Robert J. Elisberg says the Envelope’s Pete Hammond and I were mistaken in our “breathless” recent reports that the Academy screening of “Avatar” received a rapturous reaction. He was there, and says the response was “solid, generally positive,” but nothing special. Fine. I wasn’t there, but I heard from several people who were (none of whom have any stake in how “Avatar” does at the Oscars, and more than one of whom is working for its opponents), and I accurately reported what they told me. For the record, I’m not an avid “Avatar” booster and would have happily reported the mixed reaction that Elisberg says he saw … but nobody I spoke to related anything of the sort. And while he lambastes us for our perceived lack of accuracy, he also says that Pete made his comments about the potential Oscar wins for “Avatar” without having seen the movie, or “the other nominations.” I’m not sure how he thinks he knows that, but I can vouch for the fact that Pete had seen “Avatar,” and every other major contender, long before writing his piece. As had I. Despite what Elisberg says, that AMPAS screening was far from being “pretty much its first.” (The Huffington Post) 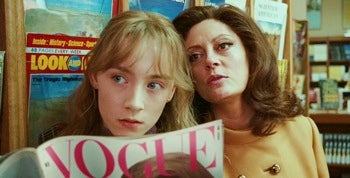 Kyle Buchanan picks the five “most vulnerable” best-picture candidates. Figuring that “Avatar,” “Up in the Air,” “Precious” and “The Hurt Locker” are shoo-ins, he looks at former frontrunners that have slipped lately: “Nine” (“fading fast”), “The Lovely Bones” (right, “dead”), “Invictus” (still in the race), “The Last Station” (“routine”) and “An Education” (“safe”). (Movieline)

Sijmen’s Oscar Experiment has “a secret … mathematical and statistical formula” to predict Oscar nominees. In its latest update, it says “The Hurt Locker” is the favorite, followed by “Inglourious Basterds,” “Precious,” “Up in the Air” and “Nine.” The presence of that last film in the top five, along with the absence of “Avatar” from the top 13, should be a pretty clear sign that his numbers just don’t add up.

But if you want to go along with his figures, he says two categories are complete locks, where it’s “mathematically impossible” for anyone else to crack the top five. The best actor slate, he swears, will be George Clooney, Jeff Bridges, Morgan Freeman, Colin Firth and Jeremy Renner (I think that’s probably right, though I’d hardly describe it as a mathematical impossibility for somebody else to sneak in), while supporting actor will be Christoph Waltz (whom he called Christopher), Woody Harrelson, Matt Damon, Stanley Tucci and Christopher Plummer.  I hope he’s wrong about that last one, because I’d certainly like to see Alfred Molina in there. (Sijmen’s Oscar Experiment)

“I’d forgotten what it felt like to see a movie that I never wanted to end.” Sasha Stone explains why she loves “Avatar,” and why she doesn’t understand those of us who don’t. (Awards Daily)