In this morning’s roundup of Oscar news ‘n’ notes from around the web, Morgan Freeman gets a strong endorsement, and “Up in the Air” keeps topping the polls.

Bill Keller, who served as the New York Times’ Johannesburg bureau chief during the time depicted in Clint Eastwood’s movie “Invictus,” says that Morgan Freeman’s performance as Nelson Mandela is “uncanny – less an impersonation than an incarnation.” The New York Times gives the endorsement prominent placement on its home page. 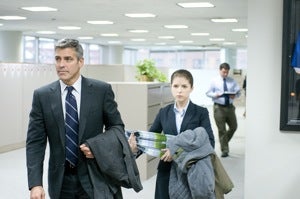 The Gurus of Gold tackle the top eight Oscar categories for the first time. Coming out on top are “Up in the Air” (right, for best picture), Kathryn Bigelow (director), Carey Mulligan (actress), George Clooney (actor), Christoph Waltz (supporting actor), Mo’Nique (supporting actress), “The Hurt Locker” (original screenplay) and “Up in the Air” (adapted screenplay). I can see all of those frontrunners winning except for Clooney, though of course it’s way too early to forecast accurately. (Movie City News)

Some of the same pundits, and a few different ones, also weigh in on the races at the Envelope’s Buzzmeter. “Up in the Air” comes out on top in this poll, too, followed closely by “Precious.” The current results are incomplete, because a couple of participants (including yours truly) submitted our predictions late and will be included in a subsequent roundup. (Gold Derby)

The National Board of Review announces its list of the year’s best films (including a single best picture) on Thursday. In advance, Dave Karger tries to predict the movies that will be nominated by the group, an odd collection of folks with no real critical standing but a little clout based entirely on the fact that they’re first out of the gate. He thinks “Up in the Air” will be their top pick. (Oscar Watch)

Here’s a shocker: Jason Reitman makes a (semi-) public appearance where he doesn’t charm everybody,  Late in a Beverly Hills Hotel interview with “A Single Man” director Tom Ford, Reitman approaches the table to pay his respects, and apparently overstays his welcome. The New York Times tells the tale, though it’s a little confusing exactly how it all transpired.

Guy Lodge looks at the new Top 10 list compiled by the British magazine Sight & Sound, and approves. The best movie of 2009, says the magazine, is the French Oscar submission, “A Prophet,” followed by “The Hurt Locker,” Claire Denis’ “35 Shots of Rum,” the German submission “The White Ribbon” and the Tk vampire film “Let the Right One In.” “Up,” “White Material,” “Bright Star,” “Antichrist” and “Inglouriious Basterds” round out the list. (In Contention)

Movie City Indie has a handy guide to the screenplays that can be downloaded this awards season. “A Single Man,” “Nine,” “Inglourious Basterds,” Precious,” “An Education,” you name it – if you haven’t seen it and you want to know how it comes out, this is the place to go.

In “Up in the Air,” she plays somebody who makes her living firing people. So Movieline talks to supporting actress contender Anna Kendrick about being hired for all of her jobs, from her Tony-nominated gig at age 12 in “High Society” on Broadway to her next film, “Scott Pilgrim vs. the World,” opposite Michael Cera.

Sasha Stone looks at Paramount’s “for your consideration” suggestions for “Up in the Air” and notices that Jason Reitman’s father Ivan is listed as one of the film’s four producers. In a 40-year career as a director, producer and writer, the elder Reitman has never been nominated for an Oscar. I can’t help but notice that Paramount lists four producers for the film – which means that an Academy producing committee may have to have to step in and iron things out, since AMPAS rules say that only three producers can be nominated. They wouldn’t dare make Ivan Reitman the odd man out, would they? (Awards Daily)