In this morning’s roundup of Oscar news and notes from around the web, the Library of Congress doesn’t exactly see eye-to-eye with Oscar voters.

Tom O’Neil takes aim at the pundits, yours truly included, who don’t agree with him that “Inglourious Basterds” is going to win Best Picture. He also thinks that we’re slowly coming around to his way of thinking. I certainly agree that the lack of enthusiasm shown for late entries like “Nine” and “The Lovely Bones” has strengthened “Basterds’” hand as a near-certain nominee, but I didn’t think the film was going to win when he first floated the idea, and I don’t think it’s going to win now. And I especially don’t think it’s going to follow the scenario he advanced when he first raised the idea, which is that it would gain Oscar momentum via a Directors Guild victory for Quentin Tarantino. (Gold Derby) 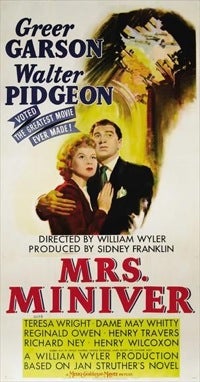 The Library of Congress names 25 new films to its National Film Registry, only one of which (“Mrs. Miniver,” left) is a best-picture Oscar winner. The list also includes “Dog Day Afternoon” (five nomination and a screenplay win), "Pillow Talk" (ditto), the Bette Davis vehicle “Jezebel” (five nominations and two acting wins for Davis and Fay Bainter), “The Muppet Movie” (two music nominations), "The Mark of Zorro" (one music nomination), "Under Western Stars" (one song nomination),  and such non-nominees as “The Incredible Shrinking Man” and Sergio Leone’s “Once Upon a Time in the West.”  Also included were short films, among them the Michael Jackson video “Thriller,” Martin Brest’s NYU student film "Hot Dogs for Gaugin," and the Oscar-winner “Precious Images,” a rapid-fire seven-minute history of classic film moments that was made for the DGA by Chuck Workman, who went on to create numerous clip packages and short films for the Oscar show. (The Library of Congress)

Dave Karger thinks it’s pretty obvious which films would be nominated if there were only five best-picture nominations up for grabs this year: “Avatar,” “The Hurt Locker,” “Inglourious Basterds,” “Precious” and “Up in the Air.” I suspect he’s probably right … though I could see scenarios in which “Basterds” and “Precious” might fall out of the top five. (Oscar Watch)

With “11 Weeks to Oscar,” David Poland surveys the field. His focus this week is on the possibly historic things that could happen at this year’s show: as many as five different animated formats among the nominees (with a category that’s only nine years old, and five nominees instead of three for just the second time, it’s hard to argue that this would be very historic); the lowest grossing winner in modern best-picture history if “The Hurt Locker” wins (a longshot, though not impossible); an actor nominated for a significantly computer-generated performance, possibly Zoe Saldana for “Avatar” (I don’t see it happening); and the first female best-director winner in Kathryn Bigelow (definitely historic, and definitely possible). (Movie City News)

Jeff Wells has a dream … that either Christoph Waltz or Mo’Nique (preferably the latter) not win the supporting actor and actress Oscars that absolutely everyone has predicted they’ll win. I have to admit, I’m getting pretty tired of the two of them winning every single critics’ group award, too. (Hollywood Elsewhere)

Guy Lodge looks at the disappointing reception for three of the big four movies to debut late in the year (“The Lovely Bones,” “Invictus” and “Nine,” with “Avatar” being the exception) and hopes that it’ll persuade studios to release good movies earlier and not hold all the presumed Oscar-bait for November and December. But he’s worried: “If ‘Nine’ and ‘Invictus’ land nominations while a spikier, more well-regarded title like ‘District 9’ still end up on the sidelines, that would prove the persistent pull of a December release, and indicate a failure of The Ten’s intent to open the Best Picture field to a more diverse slate of contenders.” Yup. And it’s a real possibility that that’s what’ll happen. (In Contention)