In this morning’s roundup of Oscar news ‘n’ notes from around the web, “Nine” becomes the latest Oscar hopeful to take a few hits (and win a few kudos) from critics.

The “Nine” embargo looks to be breaking, and the news is mixed for Rob Marshall’s musical. The Hollywood Reporter’s Kirk Honeycutt, who appears to have been the first Stateside reviewer out of the gate, posting at midnight Pacific time on Thursday, says “the disappointments here are many.” He faults Marshall more than the cast, and thinks the film’s commercial prospects are problematic.

Variety followed at 7 a.m. Friday morning – and as he often does, Todd McCarthy disagreed with Honeycutt. He calls it “a savvy piece of musical filmmaking,” and dubs it “sophisticated, sexy and stylishly decked out.” He’s not sure about how it’ll do at the boxoffice, particularly outside of big cities, but thinks the “culture vultures” will go for it. 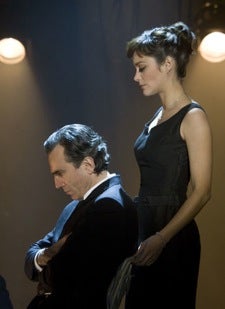 David Poland, an enthusiastic supporter of movie musicals, confirms what became clear when the movie took a tumble on his Oscar-prediction charts: He is not a fan. “Often painfully confused and superficial,” he says. (The Hot Blog)

But the Brits like it: The Times Online calls it “one of those rare things: a sombre musical, as gritty as it is glittery.” They mean that in a good way.

And the Telegraph says it’s “a ravishing looking beast” and concludes, “All concerned should take a bow.”

Off the subject of "Nine," Tom O’Neil points out that George Clooney and Clint Eastwood always win awards from the National Board of Review.  And usually they don’t repeat at the Oscars. (Gold Derby)

The weekly Oscar roundtable at Awards Daily marches on. This week’s hot topics: race, business vs. art, the state of the race (predictable or not?), and what will win best picture.  There’s so much pontificating and theorizing that Sasha Stone had to split it into two parts.

AnneThompson says the weekend brings three must-see movies: “Up in the Air,” “The Last Station” and “Bright Star.” (I’d agree that that’s the order in which you should see them.) She says “Everybody’s Fine,” “Fifty Dead Men Walking” and “Brothers” are skippable. (Thompson on Hollywood)

Kris Tapley talks to T Bone Burnett and Ryan Bingham about creating an alternative history of country music with the music to “Crazy Heart.” T Bone always does have big ambitions. (In Contention)

Stanley Tucci tells the Carpetbagger that playing a creepy child killer in “The Lovely Bones” was not very much fun. (The New York Times)

The American Society of Cinematographers will give its International Achievement Award to Chris Menges, whose films include “The Reader,” “Michael Collins” and the two he won Oscars for, “The Mission” and “The Killing Fields.” (Variety)