In this morning’s roundup of Oscar news ‘n’ notes from around the web, Harvey Weinstein and Quentin Tarantino have the Best Picture race in an uproar.

Tom O’Neil and a batch of his colleagues all jump right onto Harvey Weinstein’s “’Inglourious Basterds’ is going to win Best Picture’” bandwagon. To be fair, Tom has been on board since before Harvey got serious about selling this notion – although his initial theory was that “Basterds” was going sweep to Oscar glory on the heels of a DGA win, which didn’t happen. Now, his arguments center around the effects of preferential voting, and the theory from Variety’s Peter Bart that Best Picture winners all have a single recognizable person behind them, to which the Academy wants to give an Oscar. That means that last year, AMPAS felt that it was (“Slumdog Millionaire” director) Danny Boyle’s time??? Yeah, right. (Gold Derby) 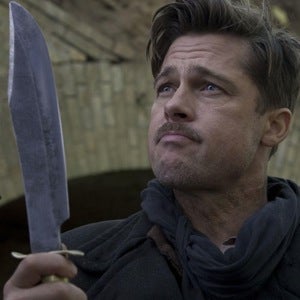 Then O’Neil elicits opinions from five other pundits to see what we think about the “Basterds” scenario. Most of those polled think it’s got a real shot to win, though nobody actually predicts it. And Jeff Wells and I say it’s not going to happen. My two cents: “I know that it’s foolish to underestimate Harvey … [but] I don’t buy the idea that the actors branch is a monolithic group that’s going to go for ‘Basterds’ en masse. And I think the preferential system will help ‘Hurt Locker’ more than it’ll help ‘Basterds,’ which is hardly a consensus kind of movie.” (Gold Derby)

On the other hand, here’s a frightening coincidence that proves “Inglourious Basterds” is going to win: its Metacritic score of 69 might be the second-lowest of the 10 Best Pic nominees, besting only “The Blind Side,” but it’s THE EXACT SAME METACRITIC SCORE AS “CRASH!” Of course, the “Crash” victory over “Brokeback Mountain” doesn’t seem any more defensible now than it did when it happened four years ago, but I’m sure “Basterds” backers will take their favorable omens wherever they can find them. (Metacritic)

O’Neil’s Envelope colleague Pete Hammond puts down the Weinstein Talking Points memo long enough to talk to Best Actor nominee Colin Firth, who nicely sums up the feeling of being immersed in awards season: "I suppose I’m euphoric but I don’t feel it now. Maybe in six months I will realize I was ecstatic the whole time." Firth, Hammond points out, may have a shot at finally taking an award from Jeff Bridges at this weekend’s BAFTA ceremony in London. (Notes on a Season)

James Cameron tells Charlie Rose that “my fantasy outcome” come Oscar night would be for Kathryn Bigelow to win Best Director for “The Hurt Locker,” but for Cameron to take the Best Picture trophy. Not for himself, mind you, but for “my team.” See, he really doesn’t need another Oscar, he says. (Charlie Rose)

Then, to make sure that all demographics understand the level of his magnanimity, he changes his jacket and tells sort of the same thing to MTV: “I would say it’s an irresistible opportunity for the Academy to anoint a female director for the first time.” And again he says he doesn’t need another Oscar, because the ones he won for “Titanic” didn’t really change his life. (/film)

Christopher Campbell surveys the Documentary Feature category, and reminds people that it’s not just a race between “The Cove” and “Food, Inc.” In one of the few categories in which voters have to see all five films before they can vote, it can be tricky to make predictions based on visibility and critical reputation; unfortunately, Campbell hasn’t seen “Which Way Home” or “Burma VJ,” so he can’t really surmise what their chances are. I think the latter film in particular could be a factor in the race. (Cinematical)

Movieline picks the four biggest longshots who might actually pull off upsets on Oscar night. Their choices: Lee Daniels, Best Director for “Precious”; Best Picture for “District 9”; Stanley Tucci, Best Supporting Actor for “The Lovely Bones”; and “The Secret of Kells,” Best Animated Feature. Well, that would make for an interesting show. (Movieline)