In this morning’s roundup of Oscar news ‘n’ notes from around the web, a guide to the world of Oscar, the cutest reaction video, and the show’s green conundrum.

Nathaniel Rogers uses Google Maps to create a “Map of the Oscar World,” which shows everything from the birthplace of acting nominees to the site of festivals that spawned many of the nominees. Go to the big version; it’s much easier to navigate. (The Film Experience) 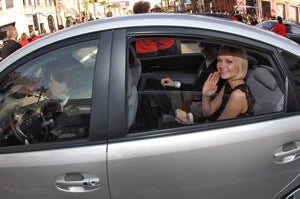 Melena Ryzik looks at a not-terribly-pressing issue: if Toyotas are being recalled and there’s a problem with the new Prius, what should environmentally-minded celebs (like Kirsten Dunst, arriving in a Prius, right) drive to the Oscars? Suggested alternatives include older Priuses, prototypes of the Chevy Volt … and, um, the subway. The director of communications for Global Green tells her “there’s one that drops a few blocks away from the Kodak Theater,” and that he’s working with the city council on logistics. Actually, the nearest subway stop is right at Hollywood and Highland, where the Kodak is located – but because that station lets out passengers within the Oscar security perimeter, it is shut down the day of the show. Are they going to reopen it for “stars only” subway trains? Don’t count on it. (Photo courtesy of Global Green) (The Carpetbagger)

Kris Tapley kicks off a new feature, “Oscar Guide,” that will find him analyzing one category per weekday for the rest of the month. First up: Supporting Actress. He finds Penelope Cruz the weakest of the nominees (no argument there), Maggie Gyllenhall the biggest threat to pull off an upset, Vera Farmiga and Anna Kendrick worthy nominees who may split the “Up in the Air” vote, and Mo’Nique the unstoppable steamroller. (In Contention)

Patrick Goldstein seems to be settling into a steady beat: he finds somebody who’s attacking Hollywood movies (far-right culture-bashers being a particular favorite), and then defends the movies against those attacks. Wednesday brings a double dose, starting with the conservative film critic who bashes “The Hurt Locker,” “District 9” and “The Messenger” for their liberal messages. Then he moves on to the Jewish Journal, and its qualms over “An Education” and “A Serious Man.” (The Big Picture)

Bryan Curtis talks to a real-life bomb-disposal tech who served in Iraq, and tries to get him to admit that the end of “The Hurt Locker” was a bit too Hollywood to be realistic. Former Marine Timothy Colomer says nope, it’s accurate. (The Daily Beast)

Julian Sancton casts the surprise nomination for the hand-drawn animated film “The Secret of Kells” as an AMPAS protest against the dominance of 3-D, computer-animated films. Only one of the five nominees, he points out, is computer animated. Of course, the Academy isn’t likely to be too dead-set against those kind of films, since the one that fits the bill is also the one that’ll win. (Vanity Fair)

Anne Thompson looks at the live event that gets bigger ratings than the Oscars, the Super Bowl, and rounds up the movie ads that will run during the game: “Alice in Wonderland,” “Prince of Persia: Sands of Time,” “Shutter Island,” “The Last Airbender” (during the pregame show), and presumably “The Wolfman” and “Robin Hood.” No word yet on which movies might be advertised during the Oscars, now that AMPAS is accepting film ads (but only for movies that have yet to open, and one per studio please). (Thompson on Hollywood)

The Gurus of Gold predict the winners in all the categories except short films. The five in boldface were unanimous. The ones in italics had no more than three dissenting voices (out of 14 voters). In other words, there’s a whole lot o’ consensus going on right now. (Movie City News)
http://moviecitynews.com/awards/2010/gurus/gurus_100202.html