In this morning’s roundup of Oscar news ‘n’ notes from around the web, Oscar contenders head north, and the Academy says “The Hurt Locker” is extraordinary.

The Academy settles the matter of which producers are eligible for Best Picture Oscars for the nominated films “The Hurt Locker” and “The Blind Side.” In the case of the latter, it was a bit odd that the credits weren’t already set when the nominations were announced on Tuesday: the film has three credited producers, which falls within AMPAS guidelines, and all three are now official nominees. The case of “The Hurt Locker” is different, because for the past 10 years Academy rules have limited the number of producers to three, whereas the film credits four: Kathryn Bigelow, Mark Boal, Nicolas Chartier and Greg Shapiro. Of the 50 films nominated since the three-producer limit was instituted, only once was an exception made – and that was for “The Reader” last year, when producers Anthony Minghella and Sydney Pollack both died during the film’s production. After determing that all four “Hurt Locker” producers genuinely functioned in the role, AMPAS invoked its “extraordinary circumstances” clause for the second time, avoiding the kind of brouhaha that afflicted “Crash” four years ago. (TheWrap)
(Below, Getty Images photo of Shapiro, Chartier, Bigelow and Boal by Dimitrios Kambouris) 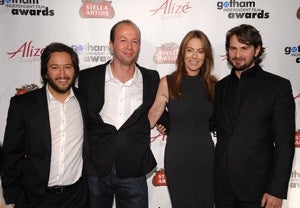 Jason Reitman tweets the following: “Clickity Click Click Clack Click Clack Click Click Clickity Clack Click Clack…” The words are accompanied by a photo of a MacBook Pro sitting next to a partially visible copy of the book “Labor Day” by Joyce Maynard. A clue as to the script he’s writing in between awards-season appearances? Seems likely, especially since a week ago he posted a photo of a yellow legal pad, blank except for the title “Labor Day” written across the top. The book is about a 13-year-old boy on a Labor Day weekend in New Hampshire – and, says Amazon, about “love, sex, adolescence, and devastating treachery as seen through the eyes of a young teenage boy.” (Twitter)

The Oscar show is a month away, many of the races seem decided, most of the major guilds have handed out their awards, and the one that hasn’t, the WGA, disqualified so many screenplays that it’s not a legitimate precursor this year. So what do we all do for the next month? Guy Lodge ponders the question, and in the process hits upon a realization that “Avatar” and “The Hurt Locker” aren’t really opposites after all; instead, he says, Kathryn Bigelow’s film is “Avatar’s” “smaller, cooler young brother. Their tastes and textures might be very different – one is romantic, the other, but they’re both hard-driving combat movies from highly visual craftsmen steeped in genre filmmaking.” (In Contention)

Sasha Stone decides to kill some time, too, so she notices the fact that Jeff Bridges is the only acting frontrunner whose film was not nominated for Best Picture. Then she goes back to the years in the 1930s and ‘40s when the Academy last had 10 Best Pic nominees, and finds out that in every case, the Best Actor winner was from a film that was nominated for, but did not win, Best Picture. Fortunately, she doesn’t try to any draw any serious conclusions. “It’s just a lot of nonsense, I know, but we have a whole month, folks. Might as well settle in and do a little head-knocking.” (Awards Daily)

Kris Tapley looks at Entertainment Weekly’s headline – “Can Anything Beat ‘Avatar?’” and says yes, a couple of things can. His piece focuses on the possible effects of the Academy’s switch to preferential tally for the final Best Picture count, which he says is “a crucial point that many a journalist … is failing to consider when calling this thing.” As a journalist who might be accused of over-considering preferential voting, I don’t disagree. He forsees a situation in which the process could help “Up in the Air,” “Up” or even “An Education” mount a serious challenge. (In Contention)