At Movie City News, this year’s “Gurus of Gold” kicks off as 16 of us pundits draw on our vast experience and unparalleled insight to pretty much take stabs in the dark about this year’s race. “The Hurt Locker,” “Invictus” and “Nine” come out on top. Much changing-of-minds will follow. (Movie City News)

Jeff Wells, not a Guru (he and MCN’s David Poland don’t get along, and Poland says Wells stopped participating mid-season when he was included) picks his “ten likeliest,” nine of which are in the Gurus’ Top 10. He also throws Terrence Malick’s “The Tree of Life” into the mix. Damn, I hope he’s right. (Hollywood Elsewhere)

Pete Hammond, whose Oscar blog “Notes on a Season” has been on hiatus since February, returns to The Envelope with assorted musings on these days of industry-wide change. (The Envelope) 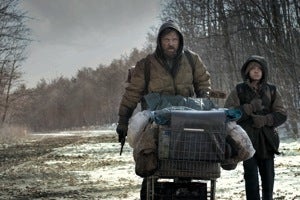 So, to a more measured degree, does Kris Tapley. (In Contention)

So does Anne Thompson. (Thompson on Hollywood)

So does Glenn Kenny, though he's not sure he saw the current version.  (Some Came Running)

So do assorted Brits. (The Guardian) (The Independent) (The Times Online)

For the record, so do I. The movie is grueling and mean and relentless, but there’s a single-minded beauty in that starkness and desperation. Bottom line: it grabbed me and it held me. And, you know, I love Viggo. Tough sell, though, definitely at the boxoffice and probably within the Academy. The audience I saw it with was annoyingly restless, which obviously isn’t a good sign.