In this morning’s roundup of Oscar news ‘n’ notes from around the web, the always-controversial foreign shortlist looms, and the Oscar race shrinks.

Dave Karger figures that the first seven best-picture slots are locked up with “Avatar,” “The Hurt Locker,” “Up in the Air,” “Precious,” “Inglourious Basterds,” “Up” and “An Education,” lists what he says are the nine contenders for the final three slots. I wonder if “Up” is as much of a lock as he thinks; it certainly deserves to be there, but the Best Animated Feature category is an awfully convenient escape hatch for uncertain voters. He thinks the final three will be “Invictus,” “A Serious Man” and “Star Trek,” with “District 9” a strong contender and “The Hangover,” “Nine,” “Crazy Heart,” “The Messenger” and “The Blind Side” all possibilities. I suspect that “District 9” is a likelier nominee than “Star Trek,” and I’d love it if “Invictus” gave up its probable slot to a smaller film like “The Messenger.” And while “The Hangover” was pretty funny … c’mon, really? (Oscar Watch) 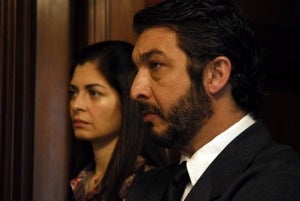 In anticipation of Wednesday’s release of the Oscar foreign-language shortlist, Guy Lodge runs down the list of likely contenders and possible snubs. To his list of guesses for the shortlist, I’d include the Argentinian film “The Secret in Their Eyes” (right), a well-crafted and touching piece of commercial filmmaking that reportedly connected strongly with the Oscar audience at its screening, as well as Mexico’s “Backyard” and Denmark’s terrific “Terribly Happy,” a Coen Brothers-meet-David Lynch gem. The problem is that too many of this year’s films are probably relying on the executive committee to get them on the list, rather than the more conservative voters – and the committee only controls three of the nine slots. (In Contention)

Vanity Fair commiserates with six good indie films that never had a chance in the Oscar race – unlike, Eric Kohn says, the likes of “Moon” and “Anvil! The Story of Anvil,” which at least got into the discussion. His list of the unfortunate snubees starts with “Humpday” (no stars, no campaign) and also included “Amreeka” (a non-commercial topic and an under-the-radar release), “Big Fan” (nobody to fund a campaign), “Trucker” (too low-key, mixed reviews), “That Evening Sun” (not enough mainstream recognition) and “Two Lovers” (hurt by star Joaquin Phoenix’s eccentricities). (Little Gold Men)

Film Misery wants to know if the Best Actor and Best Actress nominees are already essentially locked in. Their charts put Meryl Streep, Sandra Bullock, Carey Mulligan, Gabourey Sidibe and Helen Mirren on top in the Best Actress category, with Marion Cotillard and Emily Blunt lurking as possible spoilers. (Poor Abbie Cornish has apparently slipped off the radar.) On the Best Actor side, it’s Jeff Bridges, George Clooney, Jeremy Renner, Colin Firth and Morgan Freeman, with Viggo Mortensen and Michael Stuhlbarg waiting in the wings. Certainly a solid-looking group on both counts, though it’d be nice if the Academy threw in a little changeup or two. (Film Misery)

Also in the acting races, Greg Ellwood posits a frightening theory: “If [Sandra] Bullock wins the SAG Award on Saturday night there is officially a race and ‘The Blind Side’ star has taken the lead.” His math is off by a week in determining when Oscar ballots are due (it’s Saturday, less than a week after the Golden Globes), but his conclusion is plausible, much as I hate to admit it.  (Awards Campaign)

Pete Hammond says that most of the Oscar voters he knows aren’t going to fill in all 10 slots on their Best Picture nominating ballot. The way that the preferential system of tallying votes works, that doesn’t really matter, since you’re really just voting for one movie, not 10. But it could conceivably hurt a couple of films, is those last few nominations remain up in the air through many rounds of counting. (Notes on a Season)