In this morning’s roundup of Oscar news ‘n’ notes from around the web, “Avatar” is a Rorschach test and James has got a gun.

The L.A. Times has been posting video of this summit conference for a few days, but here’s the whole story: five directors sitting around talking about movies. The five are the Directors Guild nominees, and the likely Oscar nominees: Kathryn Bigelow, James Cameron, Lee Daniels, Jason Reitman and Quentin Tarantino. John Horn steers the conversation and they all talk about moments when they stood up to producers or studios … but only Cameron’s story involves him pulling an (unloaded) gun on the suit. (Los Angeles Times) 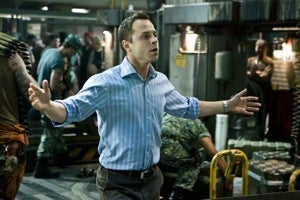 Turns out that “Avatar” (with Giovanni Ribisi, left) isn’t just a movie – it’s a “Rorschach test for your personal interests and anxieties.” So says the New York Times, which runs down the various interpretations and criticisms surrounding the film, including matters of animism and feminism and environmentalism and capitalism militarism and spiritualism and imperialism and such. But Dave Itzkoff loses me when he suggests that all the criticism has turned James Cameron into a sympathetic underdog. (The New York Times)

Kris Tapley forecasts the SAG Awards. Because they rarely match up with the Oscars four-for-four, and because the voting body consists of 90,000 members, he figures we’re in for at least one upset – which he thinks will be George Clooney (“Up in the Air”) over Jeff Bridges (“Crazy Heart”) in the Best Actor race. Otherwise, he’s thinking Streep, Waltz and Mo’Nique. (In Contention)

Anne Thompson points out that three of the nine films on the Oscar foreign-language shortlist are distributed by Sony Classics: the two presumed frontrunners, “Un Prophete” and “The White Ribbon,” and the well-regarded Argentinian entry, “El Secrete de Sus Ojos.” It’s an impressive showing – but not as impressive as it’ll be in a couple of weeks, when those three will likely make up 60 percent of the final list of five nominees. (Thompson on Hollywood)

Speaking of foreign films, John Villeneuve chooses the day of the Oscar shortlist to pick his Top 10 of the year. Three of them (“Samson & Delilah,” “The White Ribbon,” “The Milk of Sorrow” and “Un Prophete”) made the AMPAS shortlist, while three others (“I Killed My Mother,” “Police, Adjective” and “Mother”) were eligible but passed over. Plus his introduction to the list does a rather impressive job of mixing metaphors. (Awards Daily)

Melena Ryzik talks to a “professor of marketing and operations management who also studies the film business,” it says here. The prof, Jehoshua Eliashberg, uses “market research and consumer behavior data” to predict that “Avatar” will win. And he says he wouldn’t take the job of consulting with the campaign for “Up in the Air,” because he wouldn’t know how to sell that movie. Not that anybody’s asked him to. (The Carpetbagger)

“An Education” director Lone Scherfig, who landed a BAFTA directing nomination but has otherwise been curiously (and wrongly) absent from the discussion this awards season, is profiled by W magazine. Writer Diane Solway calls the Danish Scherfig “something of a cultural tourist, preferring to tackle worlds removed from her own.” (W)