In this morning’s roundup of Oscar news ‘n’ notes from around the web, Kathryn Bigelow’s ‘Locker’ puts a hurtin’ on “Avatar.”

Scott Feinberg assesses what the Producers Guild win for “The Hurt Locker” means for the Oscar race. He sums up Sunday’s events nicely: “That’s right, producers, that rare breed of money-hungry urchins, liked the movie that’s made a mere $16 million so much that they gave it their prize over the one that’s made $1.8 billion (on the very day that it surpassed “Titanic” to become the highest-grossing movie of all-time). In case you need it spelled out for you, that’s an upset of epic proportions — the cinematic equivalent of David slaying Goliath.” (And the Winner Is … )

More reactions to the PGA:

Gregg Kilday: “If the producers of the 82nd annual Academy Awards were hoping that the best picture Oscar race would develop some suspense, they have received the scenario they wanted.” (The Hollywood Reporter)

Dave Karger: “Ladies and gentleman, we officially have an Oscar race.” (Oscar Watch)

Joal Ryan: “Now, this is getting interesting.” (E! Online) 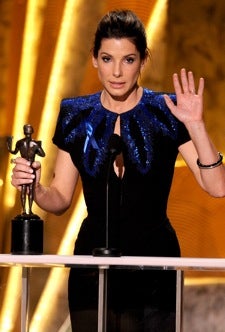 There was another awards show this weekend, too, albeit one without any moments that were too shocking. Tom O’Neil looks at how Saturday night’s Screen Actors Guild Awards might impact who wins the Oscars for acting. He thinks Jeff Bridges is now inevitable, but he won’t go that far with Sandra Bullock. (Photo by Kevin Winter/Getty Images, right.) And he doesn’t draw many conclusions from the “Inglourious Basterds” win for ensemble cast. (Gold Derby)

Guy Lodge wades into the same waters, and comes out concluding that Bullock is now the frontrunner: “So, for the next six weeks, we’re left to ponder whether Academy voters actually buy the ‘Streep is overdue’ story, or whether Bullock’s unflappable charm on the campaigning circuit can push her across the finishing line.” (In Contention)

Brad Brevet asks a fairly reasonable question: “Is 27 Years Without An Oscar too Many to Deny Meryl Streep in 2010?” Personally, I think the answer depends upon which other actress is doing the denying. I could live with Carey Mulligan or Gabourey Sidibe; Sandra Bullock, not so much. (Rope of Silicon)

Don’t cry for me, Pandora: it may have lost a big award to “The Hurt Locker,” but “Avatar” is doing just fine, thank you very much. David Poland looks at the unprecedented American and worldwide boxoffice for the film: “as a hybrid of the mega-wide-release, the international phenom, and supermuscular legs, it is a new breed.” (The Hot Blog)