In this morning’s roundup of Oscar news ‘n’ notes from around the web, “Inglourious Basterds” takes center stage, and “The Cove” strategizes.

Patrick Goldstein reveals “the dirty little secret” about the expansion to 10 best picture nominees: it won’t make any difference whether it’s five or 10, because the Oscar race is really down to four films: “Avatar,” “The Hurt Locker,” “Inglourious Basterds” and “Up in the Air.” I’m trying to figure out why Patrick thinks that’s a secret; I mean, it’s been pretty well known in my (online) neighborhood for weeks. He also comes to the same conclusion that I did on Sunday: the ratings for the Oscar show will be up, but that’ll be due to “Avatar,” not those extra five nominees. (The Big Picture)

Kris Tapley talks to Quentin Tarantino. Quentin, bless him, thinks awards season is cool. But he won’t say what his next project is going to be. (In Contention) 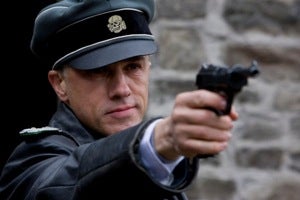 But Digital Spy claims to know about Tarantino’s next project: a violent film set in England’s Middle Ages. Marcell Minaya says the director has approached Helen Mirren about the film. Sounds dubious to me. (Digital Spy)

Meanwhile, one of Tarantino’s cast, Christoph Waltz (left; the Weinstein Company), is pretty much a lock for an Oscar. USA Today talks to the Austrian actor, who tells Donna Freydkin that in the aftermath of “Basterds,” his name recognition is up “99.999 percent.” No kidding. (USA Today)

If Waltz is a sure thing, Anthony Mackie from “The Hurt Locker” is a Supporting Actor longshot. “If anybody has said, from the writer to the producer to the actors, that when we started on this film they saw it as an Academy Award film, that’s a damn lie,” Mackie tells Kyle Buchanan. Fair enough, but as far as I know, nobody’s said that. He also says there’s “no question, no question” that Kathryn Bigelow will win the Oscar for Best Director. (Movieline)

The Carpetbagger talks to the folks behind “The Cove,” who she says are “now figuring out how to campaign for it.” Seems a little late to be doing that – but the key, says Roadside Attractions president Eric d’Arbeloff, is just to get people see the film by selling it as a thriller. The funny thing is, at this point getting people to see the movie has absolutely nothing to do with its awards strategy: the film has already won at the Critics Choice Movie Awards and Producers Guild, and in the major award that’s left – the Oscars – the nominating ballots are already in. And assuming that the film lands an Oscar nomination, AMPAS rules in the documentary category dictate that nobody can vote unless they’ve seen all five nominees. So persuading people to see your movie won’t help you, unless you can also persuade them to see the other four movies, too … and then persuade them to like your film the best.  (The Carpetbagger)

Scott Feinberg, who moves films up and down in his Oscar prediction chart with every perceived shift in the race, does his post-Producers Guild reassessment. And, no surprise, “The Hurt Locker” moves into the number-one slot. Also moving up in the Best Picture race: “The Blind Side.” If he’s right, and that one gets in instead of “A Serious Man,” somebody’s got some ‘splaining to do. (And the Winner Is … )