In this morning’s roundup of Oscar news ‘n’ notes from around the web, top Oscar contenders get a speech coach, and “Avatar” insists that it’s an underdog.

The co-chairman of Fox, Tom Rothman, tells the New York Times’ Michael Cieply – apparently with a straight face – that “Avatar” is “the ultimate underdog story.” By this logic, it’s a good thing that James Cameron’s monster hit lost to Kathryn Bigelow’s low-grossing “The Hurt Locker” at Sunday’s Producers Guild awards, because that just reinforces its underdog status. But, you know, that $1.86 billion worldwide gross puts a little dent in the narrative. (The Carpetbagger) 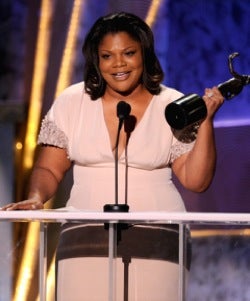 “The acceptance speech is the ultimate Hollywood audition,” says Gregg Kilday, who analyzes this awards season’s thank-yous by the four acting frontrunners. His verdicts: Christoph Waltz tends to belabor his metaphors and should be more spontaneous (not the easiest task when you’re not even speaking in your first language); Mo’Nique (right; photo by Kevin Winter/Getty Images) has been “striking all the right emotional notes”; Sandra Bullock’s stock-in-trade is surprise and self-deprecation, with “a genuine outpouring of emotion” no doubt likely should she win an Oscar; and Jeff Bridges is so easygoing and sincere that he never appears scripted. (The Hollywood Reporter)

Sasha Stone puts together a comprehensive look at the upcoming Directors Guild Awards, lauding all five nominees and deciding that “if there is a frontrunner,” Kathryn Bigelow is it. I’m slightly more confident that Bigelow will win than Stone is, but the Producers Guild certainly showed us that sure things aren’t always so sure – even if another lesson of that show was that Bigelow’s chief DGA competition, her ex-hubby James Cameron, may not have as much guild support as we thought. (Awards Daily)

And while I’m perusing Awards Daily, I have to mention this: on Monday, the site printed part of my Sunday night Wrap piece that explained how the new preferential way of counting final ballots might hurt “Avatar.” Immediately, scores of readers chimed in with questions and comments and explanations. If you want to wade back into those waters, check out comment number 163, from “Too Many AJs” – it’s the clearest layman’s explanation I’ve ever read of how the system effectively works. (Awards Daily)

Tom O’Neil rounds up the usual gang of pundits, asks who’s going to win the DGA award, and then separates the respondents into Team Cameron and Team Bigelow. Team Bigelow, in which I am included, has 19 members; Team Cameron has only seven … including O’Neil, who appears to have abandoned his theory that Quentin Tarantino was going to ride to Oscar glory on the back of a DGA win. (Gold Derby)

Hmm. Does this mean “Invictus” is a stronger Oscar contender than we thought? The Harris poll claims that America’s most popular movie star is Clint Eastwood, a 79-year-old who hasn’t appeared in a single film since 2008. Number two is Johnny Depp. Numbers four, six, seven and nine (Sandra Bullock, George Clooney, Meryl Streep and Morgan Freeman) are potential Oscar contenders. Oh, and the other number seven, who tied with Streep, is even older and less active than Eastwood: he’s John Wayne, who died in 1979. Obviously, Harris poll respondents like their old cowboy actors – which begs the question, who the heck were they polling? (E!Online)