In this morning’s roundup of Oscar news and notes from around the web, “Avatar” remains the talk of the town – but that doesn’t necessarily mean it’ll be the big winner on Oscar night.

“It looks like Jim Cameron will save old Oscar yet again,” says Variety’s Peter Bart. With “Avatar” the “betting favorite to win best picture,” Bart figures the ratings will soar the way they did when Cameron’s “Titanic” won 11 Oscars in 1998. My guess is that lots of “Avatar” nominations will indeed bump up the ratings, but not to “Titanic” levels – the television landscape has simply changed too much in the past dozen years for that. Bart also warns Oscar show producers Bill Mechanic and Adam Shankman against changing the show too drastically, citing the example of Allan Carr’s disastrous 1989 telecast, which he describes succinctly, if a bit inaccurately. (That song featuring the likes of Christian Slater and Patrick Dempsey was called “I Wanna Be an Oscar Winner,” not “I Want to Win an Oscar.”) (Variety) 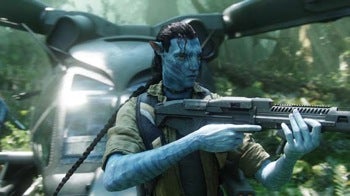 But if “Avatar” can save the Oscars, will the Oscars honor “Avatar?” Sasha Stone takes the temperature of the race, and decides that Cameron’s film came in with too much hype and has some glaring flaws (though she loves it), Jason Reitman may well be too young for “Up In the Air” to take the big prize, and “The Hurt Locker” will probably win best picture. At the moment, I have to say that I agree – not with her love for “Avatar,” but with her conclusion about “Hurt Locker.” (Awards Daily)

The L.A. Times singles out the sound of “The Hurt Locker,” which for good reason has been getting quite the push lately. (When I interviewed the film’s star Jeremy Renner on Friday, he went out of his way to mention how he didn’t notice how terrific the sound design was until he saw the movie for the third time – and I agreed that it was an element that stood out for me on my second viewing.) "I’ve exploded just about anything you can explode, and I’ve shot just about everything that can be shot," says Paul N.J. Ottosson, the film’s sound supervisor, sound designer and re-recording mixer. (Los Angeles Times)

The New York Times also salutes “The Hurt Locker,” as Manohla Dargis describes Kathryn Bigelow as an heir to Sam Peckinpah: “[L]ike Peckinpah, Ms. Bigelow is brilliant at both delivering and dissecting male violence, which is why ‘The Hurt Locker’ is at once so pleasurable and disturbing. You thrill to the violence even as you understand its horror, and your horror is doubled because you are thrilled: this is true in ‘The Wild Bunch’ and in ‘The Hurt Locker.’” Dargis’ piece is part of an Oscar package in which A.O. Scott also rhapsodizes about “Where the Wild Things Are,” while Stephen Holden praises “The Messenger” (“one of the decade’s most beautifully acted films”) is what is less a think piece than a transcript. (The New York Times)

Also in the Times, Douglas McGrath makes a case for awarding an honorary Oscar to Doris Day, “whose enrapturing screen presence has brought bliss to an uncountable mass of movie lovers.” His timing is a bit off, though: the Oscar nominations may be announced in three weeks, with the telecast two months off, but the honorary awards were voted upon by the Academy governors back in September, and handed out at the Governors Awards ceremony in November. If he’s looking to lobby the folks who could honor Ms. Day, he ought to have saved his argument for seven or eight months. (The New York Times)

“It’s always something appalling,” says the Village Voice’s Michael Musto, referring to the tendency of Oscar voters to hand out awards to the wrong people. He and the Envelope’s Tom O’Neil spend the next eight minutes comparing the most appalling Oscar injustices, which range from Grace Kelly winning the best-actress Oscar for "The Country Girl" over for “A Star is Born," to “Ordinary People” beating “Raging Bull” for best picture. It’s all terribly catty. (Gold Derby)

Anne Thompson attends the Palm Springs International Film Festival panel devoted to four foreign-language Oscar competitors: Australia’s “Samson & Delilah,” Israel’s “Ajami,” Belgium’s “The Misfortunates” and Canada’s “I Killed My Mother.” “All were clearly inspired, personal, driven works that cut through the competition to get funded, produced, and on-screen in their respective countries and were able to travel as well,” she writes.
(Thompson on Hollywood)