In this morning’s roundup of Oscar news ‘n’ notes from around the web, it’s time to give an award to the person who does the best job of accepting awards.

The Carpetbagger hears a germane question – “Who is the best acceptance speech giver?” – and, in the wake of the New York Film Critics Circle Awards, comes up with an answer: George Clooney, who is, she says, “the ‘Avatar’ of thank-yous.” I assume she’s not referring to the length of his remarks. (The New York Times) 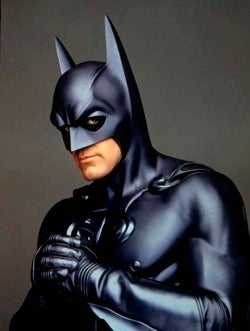 Tom O’Neil, on the other hand, goes to a different awards show, this one thrown by the National Board of Review, and offers his own verdicts on speakers, along with some video. His take: Clooney was “charming and dashing,” Gabourey Sidibe got better as she went along, Wes Anderson was clever, and Carey Mulligan was boring and shallow and could kill her Oscar chances if she gives a speech like this at the Golden Globes. I think he overstates the case, since she keeps her speech to a minute in length and doesn’t thank a laundry list of names. If I can add a personal memo to the otherwise infallible Mr. Clooney: being self-deprecating by bringing up “Batman and Robin” (right) is getting a little old. (Gold Derby)

Kris Tapley says he’d never tell Oscar voters how to fill out their ballots … but that doesn’t stop him from writing a “Memo to the Academy” in which he suggests that voters ignore the critics, forget about trying to capture the zeitgeist, and not be afraid of filling out those 10 best-picture slots with small movies that don’t have big campaign budgets. He also lobbies for the craftsmen of "A Serious Man," and for Anthony Mackie and Brian Geraghty from “The Hurt Locker.” (In Contention)

Scott Feinberg updates his Oscar forecast. “Up” is, um, up, “Invictus” is down, “Star Trek” and “Crazy Heart” are making moves, and Anthony Mackie joins Jeremy Renner as a “Hurt Locker” actor with some heat. I guess he thinks some Academy members read Kris Tapley’s memo.  (And the Winner Is … )

The Wall Street Journal talks to cinematographer Christian Berger, an American Society of Cinematographers nominee for “The White Ribbon.” He says he wanted to create “ a modern black and white film, not a nostalgic one.” (Speakeasy)

Pete Hammond goes to Monday night’s Michael Bay-hosted party for the sound mixers and editors of “Transformers: Revenge of the Fallen,” and rather optimistically casts it in terms of a “Transformers” v. “Avatar” Oscar battle. Bay also points out that if you take away the premium charged for 3D presentations, “Avatar” hasn’t really, truly beaten “Transformers” at the boxoffice.  Yet. And he says that he’s “seriously” looking at doing the next “Transformers” in 3D. Be still my beating heart. (Notes on a Season)