In this morning’s roundup of Oscar news ‘n’ notes from around the web, the Oscar show gets musical, and the animated-feature race may or may not be competitive.

Patrick Goldstein responds to an odd little trend that began early this week: stories trumpeting how “Fantastic Mr. Fox” was going to give “Up” a run for its money in the Oscar animated feature race. The New York Times said as much on Tuesday, citing its L.A. and N.Y. critics group wins, whereupon Wes Anderson’s New York Film Critics Circle Awards acceptance speech – part of it in stop-motion animation – showed up everywhere on the web, helped out by the fact that the film’s publicists sent the video all over. But Goldstein thinks the film’s lackluster boxoffice take will hurt it in a category that usually goes to a commercially successful film. I get the feeling that “Mr. Fox” is way too arch for rank-and-file Academy voters (it drew a very small crowd to its members screening), while the animators in AMPAS are reportedly quite keen on other contenders, like “Coraline” and even “Cloudy with a Chance of Meatballs.” If it were up to me, I’d say “Mary and Max” is the one that should be making a race of it – but it’s not up to me, and I suspect that “Up” is still pretty secure. (The Big Picture) 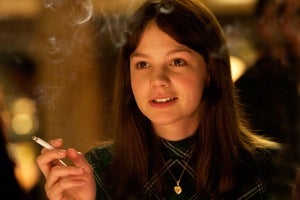 Sasha Stone predicts the Critics Choice Movie Awards. Well, she predicts some of them, anyway – in the best picture category she decides it’s between “Up in the Air,” “Avatar,” “The Hurt Locker” and “Inglorious Basterds,” makes a case for the first three, and then throws up her hands and admits she doesn’t have a clue which of them will win. She thinks Jeff Bridges will win for best actor, Christoph Waltz and Mo’Nique have the supporting categories sewn up, and Meryl Streep will take the best actress prize because “In looking at that ballot, [voters] are going to feel compelled to vote for her.” Hmm. I looked at the ballot, and I didn’t feel compelled that way at all. So I voted for somebody else. I don’t know if I’m supposed to keep it secret or not, but look around and you can figure it out. We’ll know Friday night on VH1. (Awards Daily)

Guy Lodge revises his Oscar nomination predictions, in a year when most of the contenders in the best-picture race leave him cold. His conclusion: it’ll be a good year for Hollywood, but a bad year for anybody who was hoping that the expanded best-pic slate would include offerings that weren’t born in the U.S.A. Says Lodge: “it’s hard to ignore the resounding signal that high-concept (or at least high-shine) studio filmmaking is looking to rule the Oscar roost once more.” Then again, his favorite among the top contenders, “The Hurt Locker,” is hardly high-concept or high shine. (In Contention)

Gregory Ellwood reports on “Oscar show secrets,” i.e. plans for the upcoming telecast. He says musical director Marc Shaiman has written a new song to open the show, based around the show’s theme of “team.” (As in the team of hosts in Steve Martin and Alec Baldwin.) And, he adds, “expect a glitzy number with 500 or so dancers,” though they certainly can’t fit that many on the stage of the Kodak. Other plans: a separate tribute to John Hughes may be staged outside of the usual memoriam segment, something co-producer Adam Shankman hinted at on Twitter a couple of weeks ago, and something the Critics Choice Movie Awards are doing on Friday night; “friends of each nominee” will present in the acting categories; and, if the producers get their way, Taylor Lautner will appear. I actually trust Shaiman to get the show off to a good start (I mean, the guy did write all those Billy Crystal medleys from years past), but the other suggestions scare me. (Awards Campaign)

With a week and a half to go before ballots are due, Alex Ben Block looks at last-minute campaign strategies for the likes of “The Hurt Locker” (piggyback on a December DVD release), “An Education” (shift the ads to emphasize more than just star Carey Mulligan) and “Nine” (forget about the reviews and show Penelope Cruz in her underwear). (The Hollywood Reporter)

Kris Tapley goes to a party for “The Blind Side,” and finds himself charmed by Sandra Bullock and Quenton Aaron. Sounds like fun. I tried to make it, but was unavoidably detained by theWrap’s “Avatar” screening. (In Contention)