In this morning’s roundup of Oscar news ‘n’ notes from around the web, it’s all Golden Globes, all the time.

The Los Angeles Times calls the results of Sunday night’s Golden Globes show “a major boost” for “Avatar”: “With its box-office thrust and Golden Globes, "Avatar" heads into the final week of Oscar balloting … with more momentum than any of last year’s awards-jostling releases.” (L.A.Times)

The AP’s TV critic says the show “failed as a party,” and he didn’t think much of it as a TV show either: “A little too polished. Far too dignified.” But Frazier Moore liked Ricky Gervais. (The AP via Yahoo! News) 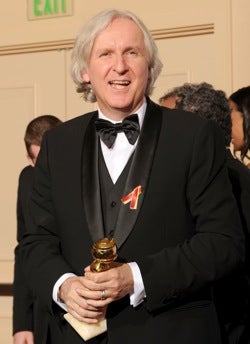 The Carpetbagger paints it as a prelude to “Avatar” domination: “[T]he received drama of the season … may be replaced by speculation on how much more Na’vi we’ll have to hear in acceptance speeches.” (The New York Times) (James Cameron photo by Kevin Winter/Getty Images)

The view from across the pond: “a blow to British hopes, as Emily Blunt, Carey Mulligan, Helen Mirren and the much-fancied Colin Firth went home empty-handed.” Three of the four didn’t have much chance going in, but I had my fingers crossed for Ms. Mulligan. (The Guardian) And then the paper goes on to craft an analysis of the evening that focuses on the insularity of the choices (which, remember, are made by writers for overseas publications): “This was Hollywood giving thanks to Hollywood, for the benefit of Hollywood, while the rest of the world peered in from the other side of a TV screen.” (The Guardian)

Dave Karger analyzes the results: “it’s looking more and more like an ‘Avatar’ vs. ‘Hurt Locker’ showdown for picture and director.” He also raises the truly horrifying possibility that “The Hangover” could displace “A Serious Man” as an Oscar best-picture nominee. Nothing against “The Hangover,” an amusing film, but that would just be wrong. (Oscar Watch)

Tom O’Neil wants to know if the Globes winners will repeat at the Oscars. Actually, he thinks he does know: he says Christoph Waltz and Mo’Nique, Jeff Bridges seems inevitable but needs to win at the SAG Awards, Sandra Bullock and Meryl Streep need SAG, and Carey Mulligan and Gabourey Sidibe don’t need to work on Oscar speeches. But he doesn’t think “Avatar” is a slam dunk. Yet. (Gold Derby)

Alex Ben Block thinks the shutout for “The Hurt Locker” hurts its Oscar chances: “While it is still likely to be an Oscar best picture nominee, it faces an uphill battle to take home the top award.” I think the film’s multitude of critics wins makes it pretty well positioned to shrug off the opinions of the Hollywood Foreign Press Association, which was never really the kind of group that would respond to the gritty immediacy of a war picture without big stars. (Hollywood Reporter)

Peter Knegt says the night saw “a generally conservative and populist batch of winners” and says that “Hurt Locker” and “Up in the Air” “both genuinely remain in the Oscar race.” (indieWIRE)

Scott Feinberg’s live blog. He points out that James Cameron is “a genius filmmaker, but could use a bit of help on coming across as humble/gracious rather than arrogant/pompous,” and notes that the standing ovation for Jeff Bridges was as significant as his best actor win. (And the Winner Is … )

You want photos? US magazine has photos. They would, wouldn’t they? If a phrase like “a Zac Posen American couture jacquard Tina gown” means anything to you, here you are. (Us Magazine.com)