In this morning’s roundup of Oscar news and notes from around the web, more critics awards lead to an uncomfortable history lesson for “The Hurt Locker.”

Tom O’Neil goes behind the scenes to reveal exactly what happened in the National Society of Film Critics balloting, which resulted in wins for “The Hurt Locker,” Kathryn Bigelow, Jeremy Renner and French actress Yolande Moreau. According to O’Neil, “Hurt Locker” and Bigelow won on the first ballot by the 46 voters, more than half of whom were not present at Sardi’s – but with proxy voting disallowed in subsequent rounds, the power shifted to the 20 members in attendance, and several races changed dramatically. This apparently was bad news for first-round leaders Jeff Bridges and Meryl Streep, who were overtaken by Renner and Moreau. (Gold Derby)

Meanwhile, a longtime member of the NSFC, Michael Wilmington, writes on Movie City News about the gathering, bemoaning the fact that Bridges missed the plurality that would have given him a first-round victory by a single vote, and that the "20 people left around the table" gave it to Renner instead. With the recent depletion in the ranks of full-time movie critics, he says, the last few NSFC meetings have been "a sad experience."   (Wilmington on Movies) 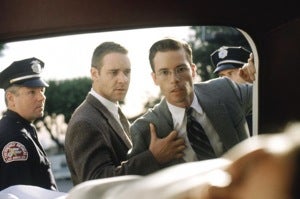 The NSFC victory for “The Hurt Locker” has led to quite a few commentators remarking on the last time a film won all three of the major critics awards: the NSFC, the New York Film Critics Circle, and the Los Angeles Film Critics Association. It last happened in 1997, when “L.A. Confidential” (left) swept the critics awards – and went on to lose the best-picture Oscar to a James Cameron movie breaking boxoffice records, “Titanic.” With “Avatar” on a similar run, comparisons are irresistible, and they’ve been made by Guy Lodge and Kris Tapley, Tom O’Neil, Sasha Stone, Scott Feinberg and a bunch of folks on Twitter. One of the other times a film won all three critics groups, by the way, it was Martin Scorsese’s “GoodFellas,” which also lost the Oscar … to “Dances with Wolves,” a film whose plot bears a remarkable similarity to “Avatar.” (“Schindler’s List” is the one film that won the Oscar for best picture after being honored by the NSFC, the NYFCC and the LAFCS.)

“Up in the Air” wins the top award at the Loutzenhiser Awards. What, you ask are the Loutzenhiser Awards? Why, they’re the annual film awards handed out by the Kansas City Film Critics Circle, of course. Apart from choosing the second most-honored film for their best film award, the group opted for the top winners in most other categories: director Kathryn Bigelow, lead actor and actress George Clooney and Meryl Streep, supporting actor and actress Christoph Waltz and Mo’Nique. "Avatar," by the way, couldn’t even eke out in a win in the "outstanding science fiction, fantasy or horror film" category, which went to "District 9."
(Kansas City Film Critics Circle)