In this morning’s roundup of Oscar news and notes from around the web, moms love Sandra Bullock, but Pedro Almodovar doesn’t always love the Oscars.

The Carpetbagger returns from vacation to ask if Sandra Bullock is going to win the Oscar for best actress. Hey, I know “The Blind Side” just passed $200 million, making it, in the words of Variety, “the first pic in history driven solely by a top female star to jump the $200 million mark at the domestic B.O.” But a best actress win? I don’t know. And the Bagger claims to be “sure of one thing: as soon as a gussied-up Ms. Bullock appears on a TV screen, everyone’s mother will turn to them and say: ‘Sandy Bullock, I just love her.’” Really? Everyone’s mother calls her Sandy?? (The Carpetbagger) 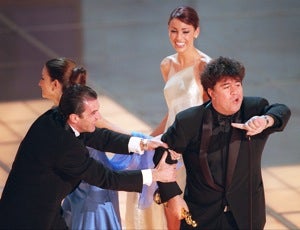 Pete Hammond talks to “Broken Embraces” director Pedro Almodovar, who complains about the Academy: “there’s a way in which the foreign film category is thought of as some kind of secondary category like documentary.” (Documentarians to Pedro: “Who you callin’ secondary?”) On the whole, though, Almodovar is pretty tame and respectful toward the Oscars; from the headline (“Two-time Oscar winner Pedro Almodovar is frustrated by Academy process”) I thought he’d be more like the Pedro who, after winning the foreign-language Oscar for “All About My Mother” in 2000, cornered show producer Lili Fini Zanuck at the Governors Ball and lectured her on how he hated that foreign-language films weren’t voted on by the entire membership, and that directors weren’t invited to the nominees luncheon, and that his lengthy speech had been interrupted by music, and that he’d been pulled away from the microphone by presenter Antonio Banderas (AMPAS photo, above)… “He took me aside for 30 f—ing minutes,” she said. “And I thought, God, what if this guy hadn’t won?” By comparison, Almodovar is on his best behavior with Hammond. (Notes on a Season)

Movie City News finds a design blog post that mocks “Avatar” for its use of the font Papyrus in its subtitles and end titles, though reader responses debate whether James Cameron actually used Papyrus or created a variant of the font instead. In the midst of the comments, a couple of readers address something that really bugged me about the film: the fact that Cameron used the name unobtanium for the super-valuable mineral that prompts the evil humans to rape and pillage the alien world of Pandora. I thought it was just a really stupid, obvious word for a valuable mineral (what, reallyhardtogetium wasn’t available?), but it turns out that it’s a science-fiction in-joke that’s been around for decades. I guess that makes it better, though I still question the wisdom of amusing the minority who get the joke at the expense of all the others who think it’s stupid. (Pr*tty Sh*tty)

The Broadcast Film Critics Association will give its Joel Siegel Award to actor Kevin Bacon at the Critics Choice Movie Awards on January 15. The award is given to “a person who understands that the true value of celebrity is as an enhanced platform to do good work,” says BFCA president Joey Berlin. In other words, the award has nothing to do with the “six degrees of Kevin Bacon” game, but with the actor’s Six Degrees charitable foundation. (BFCA)

Because we seem to be running out of American critics groups to give out awards, the Vancouver Film Critics Circle announce its nominations. Only three per category – but more categories, because they also give out a full slate of awards to Canadian films.  (Awards Daily)