In this morning’s roundup of Oscar news and notes from around the web, Adam Shankman teases and the birthday boy (jailhouse) rocks.

The Hollywood Reporter explores the demographics of Thursday’s Directors Guild nominations: namely, that Lee Daniels is the first African-American to be nominated by the DGA in the category, and Kathryn Bigelow is the seventh woman. One interesting tidbit from the story: with only five nominees to notify, apparently the lucky directors get the news not from the press release, but in a phone call from DGA president Taylor Hackford. Daniels says he wasn’t expecting a nod because he didn’t think he was “part of the club,” while Bigelow has a good, tough take on the whole “female director” angle: "I think that probably every filmmaker, male or female, longs for a day when that modifier is a moot point.” (Hollywood Reporter)

On Twitter, Oscar co-producer Adam Shankman teases: “HUGE addition yesterday to Oscars. Not just stars, but stars doing things u won’t expect! Excited for nominees: more excited for audience.” Hmm. What could it be? A paso doble from Robert De Niro and Meryl Streep? (Twitter) 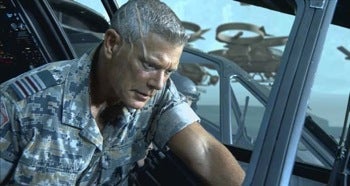 Glenn Kenny wonders if the politics of “Avatar” matter. He decides that the film doesn’t advocate the way “Birth of a Nation” or “The Passion of the Christ” did, and that its stance (corporate interests are greedy, primitive people are connected to the natural world) is a familiar one. “Just because Cameron spruces up the old tropes with specific allusions to the Iraq war and Arab-world style ululations when an Earth enemy is vanquished and so on doesn’t make these characterizations and notions particularly fresh,” he writes. And he reaches an interesting conclusion not about whether the movie’s politics matter, but about what those politics really are: “[T]he fact of the matter is—not to sound like a puling peacenik or anything—that any film that asks its audience to exult in the spectacle of violence is by definition reactionary, whatever its supposed politics pretend to be.” (The Auteurs)

Best Ensemble: “Inglourious Basterds”
Runner-up: “Up in the Air”

Actor of the Year (for an exemplary body of work): George Clooney, “Fantastic Mr. Fox,” “The Men Who Stare at Goats” and “Up in the Air”
Runner-up: Woody Harrelson, “The Messenger” and “Zombieland”

Best Score: Michael Giacchino, “Up”
Runner-up: Carter Burwell and Karen O., “Where the Wild Things Are”

Best Documentary: “Anvil! The Story of Anvil”
Runner-up: “The Cove”