In this morning’s roundup of Oscar news ‘n’ notes from around the web, everybody’s still slagging, defending, sniping, supporting and talking about “The Hurt Locker.”

Nicole LaPorte tackles the final-week saga of “The Hurt Locker”: “nasty emails, an ostracized producer, and an ill-timed story.” She details the longstanding rift between Nicolas Chartier and the other producers of the film, and points out that in most cases last-minute attacks on an Oscar favorite don’t work. She takes particular note of last Friday’s front-page L.A. Times story in which some soldiers and veterans impugned the movie’s accuracy, questioning its timing and the motives of at least one of the veterans quoted, a movie producer with his own war films in the works. (The Daily Beast)

At EW’s Oscar Watch, Dave Karger looks at the “Hurt Locker” email controversy, and the other recent attacks on the film, and compares them to last year’s unsuccessful last-minute campaigning directed at “Slumdog Millionaire.” “It’s times like these,” he writes, “that make me hate the Oscar season … It all reeks of desperation on the part of the film’s competition, to take down the movie that nearly every guild has anointed as the best of 2009.” (Oscar Watch) 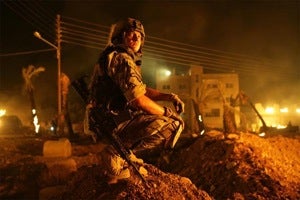 David Poland takes on his favorite target, the entertainment media, and says that Karger’s take is nonsense. “‘The Hurt Locker’ is nobody’s victim,” he says. “If it loses, it was going to lose anyway.” He also thinks that the Daily Beast story on the movie didn’t add much that was new, that last week’s L.A. Times story on the movie’s accuracy was lame, and that it’s a miracle that “The Hurt Locker” has made it all the way through the season as a strong Best Picture candidate despite its low grosses. “[I]n the hype of it all, the possibility of a win has gone from a shocking possibility to something that will be painful to lose on Sunday,” he says. (The Hot Blog)

In a non-scandal-related “Hurt Locker” front, Nancy Kriparos talks to Jeremy Renner, who says the movie’s awards-season success – and, of course, his Oscar nomination – have definitely changed things for him: “A lot of people in the business have known who I was for a long time but now they have a little bit of courage or whatever it is and say, ‘Now we can actually cast him.’” (Awards Daily)

S.T. VanAirsdale analyzes the Weinstein Company’s final “Inglourious Basterds” ad, which is based on Mick LaSalle’s endorsement in the San Francisco Chronicle, and in which some of the swastikas in the film’s original artwork have been replaced by Stars of David. His conclusion: this year, nobody wanted it more than “Basterds” wanted it. (Movieline)

Reuters talks to the lawyer in charge of defending the sanctity of Oscar. It turns out that David Quinto, who goes after people who try to sell Academy Award statuettes or make fake Oscars or otherwise tarnish the brand, also mans the so-called “Help Table” outside the Oscar show, where guests with ticket irregularities are sent to be helped, escorted off the premises, or arrested, as the case may be. As for the business of protecting the trademark, he says, “A lot of what I do involves bluffing and persuasion.” As someone who scrapped the planned cover of my Oscar book when an AMPAS lawyer gently informed me that they “might have a problem” with the prominence of that little gold statuette, I can testify that they’re a persuasive bunch. (Reuters)