In this morning’s roundup of Oscar news ‘n’ notes from around the web, it’s time for party tips, quizzes and pools, stats about the “Oscar bump” … and yeah, more “Hurt Locker” stuff.

This is the best Oscar competition I’ve run across: Awards Daily’s "Predict the Oscars WRONG Contest."  Pick who won’t win in all 24 categories, and you could win a prize.  Apparently it’s harder than it looks.  I might have to enter.  (Awards Daily)

USA Today has a colorful graphic headlined “How to Throw a Blockbuster Oscar Party,” with links to recipes, drinks and games. Judging by the graphic, though, the ideal Oscar soiree also requires the paper’s Hollywood reporter Anthony Breznican, which may be a little hard to arrange for most people. (USA Today) 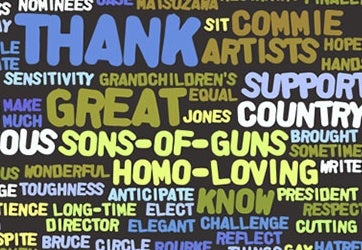 The Guardian has one of the trickiest Oscar quizzes I’ve seen: guess last year’s winner from “Wordles,” jumbles of words taken from their acceptance speeches. It’s not hard to figure out who mentioned the named Pedro, Woody and Weinstein, or who used the phrases homo-loving and commie, but I’d forgotten which winner mentioned Winnie the Pooh and Tigger.  (The Guardian)

Movieline invites viewers to play its “In Memoriam’ Oscar Montage Pool,” with point values for the riskiest guesses. Who’ll open the montage? Who’ll end it? (Five points for guessing Patrick Swayze, 25 for David Carradine.) Who’ll be the oldest person included? (That one seems easy: go with Karl Malden, 97 when he died.) Who’ll be the first actor in the package, the first director, the first “international auteur”? (Movieline)

And if you want a more serious look at putting together the always-problematic sequence, Sandy Cohen talks to Academy executive director Bruce Davis (who says it’s “the single most troubling element of the Oscar show every year”) and director Chuck Workman, who assembled the piece this year. (The Associated Press)

Hollywood.com examines the “Oscar bump” – i.e., how much more money recent Best Picture winners earned after the nominations, as opposed to before. Of course the results are dependent on timing and release patterns as much as on the Oscars themselves, but the winners that have earned more after nominations than before include “Slumdog Millionaire,” “Million Dollar Baby,” “Chicago” and “Shakespeare in Love.” (Hollywood.com)

David Edelstein doesn’t like the idea of 10 Best Picture nominees. “My own shorter view, although you haven’t asked, is that the move from five to 10 nominees for Best Picture is especially ludicrous given that the winner is a virtual (hurt) lock,” he writes. “ … Sure, it’s always possible we’ll hear, ‘And the Oscar goes to … District 9.’ And then I’ll fall in a hole and have tea with the Mad Hatter.” (New York magazine)

Melena Ryzik covers the “Hurt Locker” lawsuit claiming that the film appropriated the real character of Sgt. Jeffrey Sarver without permission. She talks to a lawyer who points out that with the Writers Guild and the Academy both certifying that Mark Boal’s script is original, and not an adaptation of his 2005 Playboy magazine article about Jeffrey Sarver, “That to me signals that the claims may not be of merit.” (The Carpetbagger)

Just in time to capitalize on that lawsuit, Playboy re-publishes the Mark Boal bomb-squad story that (indirectly) led to “The Hurt Locker.” They change the artwork, though; instead of the original photos and illustrations, now we’ve got a photo from the movie. As David Poland points out, this kind of plays into the hands of Sgt. Jeffrey Sarver, whose suit contends that the main character in the film is him: “See, even Playboy can’t tell the difference!" (Playboy)

Kris Tapley nears to the end of his day-by-day recap of all the Oscar categories, this time with Best Director. “In the final analysis, this really should be your easiest call,” he says, predicting a Kathryn Bigelow win. But in the “Could Win” and “Should Win” categories, he puts James Cameron and Jason Reitman, respectively. (In Contention)

Canadian filmmaker Barry Avrich, who directed the documentary “The Last Mogul,” about the ultimate Hollywood power player, Lew Wasserman, has secured financing for a new documentary about controversial mogul and master Oscar campaigner Harvey Weinstein. The working title, according to Michael Cieply, is “Unauthorized: The Harvey Weinstein Project”; Avrich told Cieply that he expects to finish the film within a year. Although a spokesperson for the Weinstein Company commented, “The Weinsteins are aware of the documentary and think that Mr. Avrich is a great filmmaker,” Avrich says Harvey Weinstein advised him not to make the film, partly because Quentin Tarantino is considering a similar project. (The New York Times)