In this morning’s roundup of Oscar news ‘n’ notes from the web, an Oscar host reflects, and others explain.

Alec Baldwin writes about hosting the Oscars. He’s relentlessly diplomatic: “I had a wonderful time at the Oscars this year, because the reality of just how many remarkably talented people work in the movie business was never more vivid to me than last night.” But he wishes “(500) Days of Summer” had been nominated. (The Huffington Post)

Oscar video clips galore. Red Carpet Cam, for interviews. Backstage Cam, if you want to see a 20-second clip of Kate Winslet and Sean Penn hugging and saying tings you can’t understand. VIP Cam, to watch winners walking down hallways and posing for photos. Thank-you Cam, where Jeff Bridges talks so long that he takes up five clips. (Oscar.com) 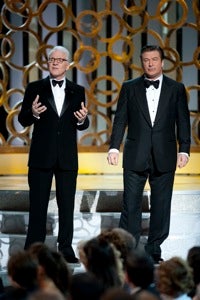 Gawker explains “10 Academy Awards mysteries,” including “what was up with George Clooney’s face?” and “Why the hell was there street dancing at the Oscars?” Actually, they don’t really explain most of them – they just kind of riff on things they thought were odd, or silly. (Gawker)

Pete Hammond watches the Oscars at the “Night of 1,000 Stars” fundraiser at the Beverly Hills Hotel, and decides that the actors branch was clearly responsible for the failure of “Avatar” to win Best Picture. He says the room, which was heavy on acting vets, responded very favorably to Jeff Bridges, Sandra Bullock and “The Hurt Locker” – though after that last film was named Best Picture, actress (and one of James Cameron’s ex-wives) Frances Fisher asked, "How the hell did that happen?" (Notes on a Season)

Ryan Adams has information on the sign help up by Rick O’Barry Sunday night, before the camera quickly cut away from the winners for “The Cove” the orchestra drowned out director Louie Psihoyos’ speech. The message, “Text DOLPHIN to 44144,” allows callers to join a mobile subscriber list and sign a petition to shut down the dolphin slaughter at the cove in Taiji. (Awards Daily)

Michael Moore praises the political stances taken by both “The Hurt Locker” and “Avatar,” then names his 20 best pictures of the year. Only two of the 20 – “In the Loop” at Number Seven and “Fantastic Mr. Fox” at 20 – were Oscar nominees. (Michael Moore.com)

Patrick Goldstein says the Oscar telecast was “another huge disappointment, a colossal missed opportunity.” He takes particular aim at first-time director Hamish Hamilton. He also thinks the producers spoiled the moment of Kathryn Bigelow’s Best Director victory by having Barbra Streisand (“chosen for her star power, not her directing chops”) make the presentation. Streisand, he says, “was clearly picked after the producers knew Bigelow had won,” – by which I assume he means after they knew she was a prohibitive favorite, since she was booked before the votes had even been turned in. (The Big Picture)