In this morning’s roundup of Oscar news ‘n’ notes from around the web, the “Precious” debate is on, and Halle Berry beats Cuba Gooding for a dubious honor.

The latest print edition of The Envelope is out. It surveys the new landscape for Oscar campaigning, gives Carey Mulligan the cover, talks to supporting-actor contender Stanley Tucci and gives a boost to the candidacy of “A Serious Man” costume designer Mary Zophres. More to the point, it gets the L.A. Times 12 pages of “for your consideration” ads. 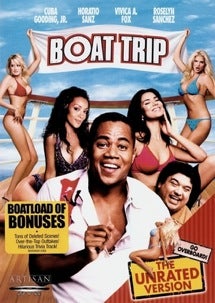 Premiere chooses the top 10 worst post-Oscar career choices. I thought Cuba Gooding Jr. pretty much retired this particular trophy with his "Jerry Maguire"-to-"Boat Trip," etc. career path, but Premiere ranks him at only the fifth worst, behind Susan Sarandon (who went from “Dead Man Walking” to “Stepmom”), Kevin Spacey (“The Usual Suspects” to “K-PAX”), Roberto Begnini (“Life Is Beautiful” to “Pinocchio”), and the number one pick, Halle Berry (“Monsters Ball” to “Catwoman”). Personally, I’d give Halle a break and move her out of the top spot simply because that sequence gave her a magical, gutsy, classic Hollywood moment: she showed up at the Razzie Awards to accept her worst-actress honor carrying her Oscar. You go, girl.

Jeffrey Wells admits that “Precious” is a sure-fire best-picture nominee, but says that it won’t win: “’Precious’ is primarily about a film about compassion and reaching out, but mainly in the third act. Otherwise it’s an exploitation film that deals in ghastly abhorrent behavior. It drags the audience down into a pit of gross squalor and story manipulation in order to score its points.” He rounds up a fair amount of anecdotal evidence and comments from like-minded sources to play up the film’s vulnerability with Oscar voters. (Hollywood Elsewhere)

Tom O’Neil also wades into the “Precious” waters, and says that attendance wasn’t great at a recent Academy screening … but voters will see it later on DVD and give it lots of nominations … like “Dreamgirls,” which didn’t get a best-picture nod … but it garnered enormous per-screen averages … like “Brokeback Mountain,” which famously lost to “Crash” … but it’ll get big support from the actors branch … and not much from the below-the-line Oscar voters … but it can still win best picture … but maybe it won’t. Got all that? His conclusion is that Oscar pundits are really smart, but he doesn’t know if “Precious” will win. (Gold Derby)

Guy Lodge responds to his In Contention colleague Kris Tapley with his own list of what’s going to win in March. They agree on most of the highest-profile awards (beginning with “Precious” for best picture) but disagree on most of the others. Lodge goes with more “Hurt Locker,” “District 9” and “Up,” less “Star Trek” and “Nine.”

Tapley, meanwhile, thinks Dion Beebe is going to win the cinematography Oscar for “Nine.” (In Contention) The Nine – The Movie blog offers 11 new photos to help make his case.

And the nominees are: "Harry Potter and the Half-Blood Prince," "Star Trek," "The Hangover," "The Proposal" and "Twilight."  That’s the "favorite movie" category at the People’s Choice Awards, which has absolutely no relevance in the Oscar race.  Here and there, the nominees include a few Oscar contenders: Anna Kendrick, "Inflourious Basterds," "District 9," "(500) Days of Summer" …  (USA Today)

Avid Twitterer (Tweeter?) Scott Feinberg exhaustively surveys the use of Twitter by Oscar hopefuls and pundits. He lists 66 people to follow; I’m the last person on the list. Fortunately, the list is organized alphabetically (I’m under W for Wrap, not P for Pond), not qualitatively. (And the Winner Is)