In this morning’s roundup of Oscar news ‘n’ notes from around the web, animation fans count to 20, and Jason Reitman wins free ribs for life!

The trick to winning an Oscar, some people say, is making it clear that it’d really mean a lot to you, but not getting too needy about it.  "Up in the Air" director Jason Reitman appears to have the second part of that equation down pat, since he just tweeted that the card pictured below (c 2009 Twitpic, Inc.)  is “better than winning the Lotto, an Oscar, and the Superbowl!” 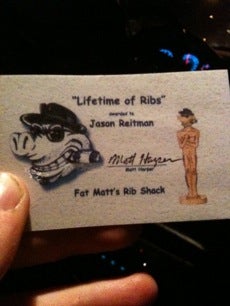 David Poland likes the year in animation, and breaks down what no doubt happened when it became clear that the Oscar animated-feature category was on the verge of enough entries to expand the category from three nominees to five: Disney and Fox stepped in and entered films they might otherwise have sent straight to DVD (“Tinker Bell and the Lost Treasure,” “The Dolphin – Story of a Dreamer”) or not entered in the category (“Disney’s A Christmas Carol,” “Alvin and the Chipmunks: The Squeakquel”). (The Hot Blog)

Over at Awards Daily, meanwhile, a reader has created a nice montage of stills from all 20 entries in the category. In this format “Coraline” stands out, not that that means anything.

Pete Hammond surveys the animated field and wonders if Disney’s new (but old-school) “The Princess and the Frog” might have a shot of actually beating “Up.” He also suspects that “Alvin and the Chipmunks” might be disqualified for not having enough animated content. (The rules say that a significant number of major characters must be animated, and “animation must figure in no less than 75 percent of the picture’s running time.”)  (Notes on a Season)

In this week’s installment, the Gurus of Gold stick with the same 11 films as best-picture contenders, with “Up in the Air,” “Precious” and “The Hurt Locker” continuing to top the list. They (actually, we) also tackle the supporting categories for the first time, giving Mo’Nique a sweep and Christoph Waltz a slight lead over Alfred Molina. (Movie City News)

Fox Searchlight has reportedly decided to give Maggie Gyllenhaal a best-actress campaign for “Crazy Heart,” running counter to the conventional wisdom that puts her in the supporting-actress category. Kris Tapley thinks she was “a sure-fire” supporting-actress contender and should be taken seriously in the best-actress field. (In Contention)  Anne Thompson thinks that it’s Jeff Bridges movie, and Gyllenhaal was a longshot for supporting and a longer shot for best actress. (Thompson on Hollywood) I’m with Anne on this one; it’s a lovely little film with a remarkable performance from Bridges, but I don’t see much room for Gyllenhaal in the best-actress race.

Impending honorary Oscar recipient Roger Corman tells the AP that he never expected to win an Oscar because he makes low-budget movies. (The AP via Yahoo! News)

Patrick Goldstein is amused by the Weinstein Company-Disney partnership on behalf of “Nine,” given Harvey and Bob Weinstein’s acrimonious departure from the company they founded, Miramax, once it joined the Disney family. He also thinks the whole thing sounds tacky. Tacky? Oscar camaigning? Forget it, Patrick. It’s Chinatown. (The Big Picture)

Remember when Goldstein made fun of Lou Lumenick for including “2012” on his list of best-picture predictions for the Envelope? Well, never mind. Lumenick says he was just kidding. (New York Post)