In this morning’s roundup of Oscar news ‘n’ notes from around the web, the Academy shows off lots of Governors Awards footage, and “Nine” finally screens … but who’s talking?

Rob Marshall’s “Nine,” one of the big four films yet unseen by most Oscar-watchers, screened this weekend in New York for the Hollywood Foreign Press. All who saw it were under a strict embargo that forbade them from writing, tweeting, or saying anything about what they thought. But that’s not to say that some first impressions didn’t leak out, mostly on Twitter. @allisonnawoj gushes, “Incredible acting, beautiful cinematography. Awesome awesome awesome.” @makealistfirst says, “Penelope Cruz is gorgeous as always,” which doesn’t say much about the movie itself. @GwynGilliss adds, “Sultry performance by Penelope Cruz”; ditto. And on the other side of the ledger,  @clembastow asks, “when is someone going to make a cinematic adaptation of a musical that DOESN’T suck?”, but that estimation appeared to come from watching a snippet, not the entire film. Do we trust any of them? No, not really. (Photo, below: the Weinstein Company) 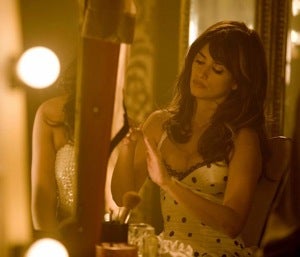 Saturday night’s Governors Awards ceremony wasn’t televised, but the Academy has posted video of most of the event on its website. My favorites are Ron Howard toasting Roger Corman, Quentin Tarantino’s irrepressible rant (part one and part two), Caleb Deschanel reminding everyone of Gordon Willis’ distaste for Hollywood, and Warren Beatty’s admission that the many stories he could tell were all self-serving. (Academy of Motion Picture Arts and Sciences)

Pete Hammond talks to everybody at the Governors Awards and finds out that upcoming Oscar show producer Bill Mechanic is nothing like last year’s secrecy-obsessed team of Bill Condon and Laurence Mark.  Mechanic spills the beans on two aspects of the upcoming show: he and co-producer Adam Shankman plan not to repeat the practice of having five past winners salute the acting nominees, and they’ve already booked Quentin Tarantino and Pedro Almodovar to present the Oscar for foreign-language film.  Almodovar’s participation should be interesting — because almost eight years ago, after winning that award, Almodovar used the Governors Ball to complain at length to producer Laura Ziskin about how the foreign-language nominees were to his mind disrespected by the Academy.  (Notes on a Season)

Movieline looks at honorary Oscar winner Gordon Willis’ greatest hits – or, at least, his six greatest achievements as a cinematographer. The magnificent “Manhattan” only comes in at number five; “Zelig,” which Willis admits was more of a technical trick than a great job of cinematography, takes the sixth slot.

Against his better judgment, Ryan Adams lists his own 12 predictions for the best-picture nominations, because he thinks they differ enough from the conventional wisdom to be worth airing. He says he hesitates to include big films he hasn’t yet seen, but of the big four, he leaves “Avatar” and “Invictus” off his list but does include “The Lovely Bones” and “Nine.” (I’m assuming that he’s not one of the Hollywood Foreign Press members who saw “Nine” over the weekend.) He also chooses “A Single Man” over “A Serious Man,” leaves out “Up,” and goes with one austere film (“Bright Star”) and a few more commercially oriented ones: “Star Trek,” “Julie & Julia,” “(500) Days of Summer.” (Awards Daily)

Tom O’Neil thinks the best-actor nominees will be Jeff Bridges, George Clooney, Colin Firth, Morgan Freeman and Viggo Mortensen. His favorite (not to win – just his personal fave) is Mortensen. The likeliest winners, he thinks, are Bridges, Clooney and Firth. (Gold Derby)

Variety identifies 21 films it says are vying for the 10 best-picture nominations. It’s a little tricky to find the list – as far as I can tell, you have to scroll through a few pages of “Oscar news” to find each one listed individually – but they appear to be covering everything that has a chance and quite a few that really don’t. And then they use a second piece to add 10 more possibilities. I’m not quite sure how “The Informant!” and “The Men Who Stare at Goats” made the main group while “The Last Station” and “Brothers” were restricted to the “other contenders” list.

CORRECTION: The original version of this story incorrectly stated that Bill Mechanic and Adam Shankman were planning to continue the last Oscar show’s practice of using five previous winners to salute the acting nominees.  The reverse is true.  I misread Pete Hammond’s original post and am embarrassed by the error.