In this morning’s roundup of Oscar news ‘n’ notes from around the web, Peter Jackson cranks ups the suffering in “Lovely Bones,” while Alec Baldwin shrugs off the pressure.

Entertainment Weekly lists 25 longshots they’d love to see win Oscars. All their picks are for either best picture or the acting categories, five each. I’m with them on some of their faves (Viggo Mortensen in “The Road,” Ben Foster and Samantha Morton in “The Messenger” … ), but the gallery leaves me with a few questions. For instance, is “An Education” really a longshot for a best picture nomination? (I hope not.) Are they rooting for “It’s Complicated” because they’ve seen it? (Maybe, but I hear it’s not finished.) And are they really backing, say, Clive Owen in “The Boys Are Back” or Hilary Swank in “Amelia,” or do they just need to fill all 25 slots in their photo gallery? (I’ll let you answer that last one.)

Nathaniel Rogers knows he’s not supposed to say anything – in fact, he no doubt signed a paper promising that he wouldn’t – but he just can’t help himself. He wants you to know that he enjoyed “Nine.” And loved Marion Cotillard. And, well, he can’t say any more. (The Film Experience) 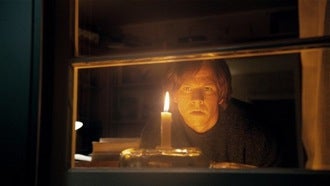 Peter Jackson tells Reuters that test screening audiences wanted more violence and suffering in “The Lovely Bones” (right).  So he did reshoots and added it, which won’t necessarily win him points with Oscar voters. If you read his explanation closely, by the way, it’s not to hard to figure out that he might be giving away something pretty important about the movie. (I say this without having seen the film or read the book, so I’m just guessing.) (Reuters via Yahoo! News)

The Envelope publishes another print edition. Viggo Mortensen gets the cover, Christoph Waltz and Vera Farmiga get inside stories, and the L.A. Times gets 16 pages of ads, up by four from last week. Most are from legitimate contenders, but some smack of artist-stroking: I mean, Jim Carrey for best actor for “Disney’s A Christmas Carol”? Really? Plus, New Films International suggests three films I’ve never even heard of for best picture: “The Lightkeepers,” “A Beautiful Life” and “Don’t Fade Away.” Good luck with those, folks. (Los Angeles Times)

Alec Baldwin says he isn’t nervous about hosting the Oscars, because all the pressure is on Steve Martin. (Apparently he doesn’t know that among Oscar hosts, Martin is Mr. Never Let Them See You Sweat.) Baldwin’s quotes come in a story from the BANG Media syndicate, which also points out that Baldwin and Martin will become the first Oscar co-hosts since 1929. That would be a mighty impressive statistic if it were true – but to make it true you’d have to ignore Bob Hope and Jimmy Stewart in 1946, and Hope and John Cromwell in 1945. In other words, it’s not true.  (Monsters and Critics)

Dave Karger wonders if Academy voters will see “Avatar” on the big screen in 3D, or if they’ll wait for the 2D DVD screeners that Fox hasn’t said they’re sending out. He doesn’t have an answer; he just wonders. (Oscar Watch)

Sasha Stone takes an in-depth look at the National Board of Review and its upcoming ten best list. Maybe more of an in-depth look than that dubious group deserves. She predicts a hodgepodge … that includes “The Hurt Locker,” “Precious,” “An Education,” “Up in the Air,” “Nine,” “A Serious Man” and “Invictus.” (Awards Daily)

Steven Zeitchik watches “The Blind Side” and thinks of “Precious.” But the movie’s director doesn’t like that comparison. And Zeitchik doesn’t feel that “Blind Side” star Sandra Bullock has much of a chance at an Oscar nod. Except that he thinks it’s “a really weak year” in the best-actress category, so maybe, just maybe … (Risky Business)

Roger Friedman talks to Oscar-winner Glen Hansard, one of the stars of the movie “Once,” about his ongoing duet (professional but no longer personal) with Marketa Irglova. I don’t want to quibble too much with a guy who endorses a couple of favorites of mine (I’m seeing them Wednesday night at the Wiltern), but hey, Roger: they’re not “now called the Swell Season,” because that was the name they went by before “Once” ever came out. And they didn’t really leave Sony Music Soundtrax for an indie label; the Sony deal was just for the soundtrack album. And their version of the Van Morrison song “Into the Mystic” isn’t on the new album; it was a bonus track on the deluxe edition of the “Once” soundtrack, and it’s on a compilation album called “Before the Goldrush.” But, you know, thanks for writing about them. (Showbiz 411)