In this morning’s roundup of Oscar news ‘n’ notes from around the web, the doc shortlist gets scrutinized and the top categories get analyzed.

New Gurus of Gold charts. “Precious” is now in the top slot, “Up in the Air” drops to second, “Invictus,” “The Hurt Locker” and “An Education” follow. But “Precious” director Lee Daniels is only fourth on the best-director chart, behind Jason Reitman, Kathryn Bigelow and Clint Eastwood. Unsurprisingly, “Up” dominates the animated-feature predictions. (Movie City News)

Vanity Fair jumps into the Oscar-handicapping game. In part, this consists of rounding up the usual suspects – “Precious,” Jeff Bridges, Carey Mulligan, Kathryn Bigelow — though Julian Sancton then goes on to break down picks and dark horses in nine categories. He thinks Quentin Tarantino is a more likely best-director nominee than Jason Reitman, which sounds a little crazy to me.  (Little Gold Men) 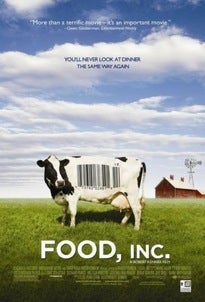 A.J. Schnack considers the newly-released documentary-feature shortlist. To him, the most surprisingly omission is the Anna Wintour doc “The September Issue,” along with Aron Gaudet’s “The Way We Get By.” He figures that the frontrunners are “The Cove,” “Food, Inc.” (right) and “Burma VJ,” and that the final two nominations will go to “The Beaches of Agnes” and “Mugabe and the White African.” (All These Wonderful Things)

David Poland also looks at the doc shortlist and deems it “very strong.” He thinks that “Tyson” should have been on the list, and that the frontrunners are now “The Cove,” “Every Little Step” and “Valentino: The Last Emperor.” I’ll go with him on the first of those, but I’ll bet that at least one if not both of the other two doesn’t land a nomination. Oscar doc voters like serious issues way more than they like entertainment or fashion. (The Hot Blog)

Michael Cieply examines the surprise emergence of “Crazy Heart” in the race, and the intriguingly tangled tale of the film’s road to Oscar: made by Country Music Television, rejected by Paramount, rescued by Fox Searchlight. (The New York Times)

Kris Tapley listens to the U2 song “Winter,” their Oscar contender from the Jim Sheridan movie “Brothers,” and figures the song could make the cut and land a nomination. Based on a single listen (which, let’s face it, is what most music-branch voters will give it), I’d say Bono and the boys will have a rough go of it. The song begins over the final moments of the film, but most of it plays over the credits, which will diminish its impact when voters watch the clip-compilation reel that is now used for judging in this category. And more damaging, to my mind, is that the song sets up a nice mood but doesn’t really go anywhere; there’s no real hook, no chorus that stands out, not enough to grab voters who’ll be considering 40 to 50 songs in one sitting. I love U2; and I really love “Bad,” the 1984 U2 song that figures prominently in the movie and is even incorporated into the score; and I may learn to love “Winter” once I’ve heard it a dozen more times – but for now, my guess is that there’s no Oscar on the horizon for this particular track. (In Contention)

Tom O’Neil thinks that the three frontrunners in the supporting-actor race are 1) Christoph Waltz in “Inglourious Basterds,” 2) Christopher Plummer in “The Last Station,” and 3) Alec Baldwin in “It’s Complicated.” To which I say: 1) of course; 2) yes, unless the actors branch decides he’s lead; and 3) whaaat? But then, I haven’t seen “It’s Complicated” yet. Still, I have a hard time believing that Alfred Molina in “An Education” isn’t near the top of the list, too. (Gold Derby)