In this morning’s roundup of Oscar news ‘n’ notes from around the web, “Tyson” strikes back, things fall apart, and Nic Cage gets weird.

When I said yesterday that the omissions in this year’s documentary shortlist “aren’t going to stir up any grand talk of conspiracies,” I guess I wasn’t taking “Tyson” director James Toback into account. Toback tells the New York Times that during the first-round committee screening process, he experienced something “which I put fully in the category of extortion.” No details, no specifics – just hints about “some tiny, dirty covert weirdly protective little group within the Academy,” by which he means the volunteers from the documentary branch who screened and scored the 84 eligible films to reach the shortlist of 15. Rob Epstein, the documentarian and Academy governor who chairs the branch’s executive committee, says he has no idea what Toback’s talking about. (New York Times) 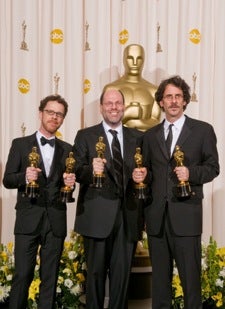 After detailing the most despicable Oscar snubs of the decade last week, indieWIRE’s Peter Knegt celebrates “25 things the Academy got right.” He includes Enimen’s best-song win for “Lose Yourself,” the winners in the animated-feature category, Roman Polanski’s and Steven Soderberg’s best-director wins for “The Pianist” and “Traffic,” respectively, the plethora of indies and foreign films in the screenplay categories … and, in the top spot, the overall choices made by Academy voters in 2007: “No Country for Old Men” for best picture, “Falling Slowly” from “Once” for best song, “There Will Be Blood” for cinematography, and an acting slate of Daniel Day-Lewis, Marion Cotillard, Javier Bardem and Tilda Swinton. (Left, that’s Ethan Coen, producer Scott Rudin and Joel Coen with their Oscars for “No Country”; photo by Matt Petit/AMPAS)

Jeff Wells talks to a guy who says “everything’s falling apart.” He’s apparently talking about the perception that “Nine,” “The Lovely Bones,” “Invictus” and “Avatar” are front-runners sight unseen, and the way that perception might be taking a hit now that the first two are beginning to screen. But there’s no telling who the guy is, what he’s actually seen, and whether he’s working from anything more than a hunch. (Hollywood Elsewhere)

David Poland sums up the race with 17 weeks to go. Actually, he spends most of his time summing up the state of Oscar coverage. As usual when Poland looks at the entertainment press, it’s not a pretty picture: “more relentless and less thoughtful than ever,” he says. (Movie City News)

Sasha Stone convenes pundits and asks questions. The most passion comes from the folks who thought moving the honorary Oscars into a separate Governors Awards ceremony was a terrible idea. I’m not one of them. (Awards Daily)

Dave Karger assesses the Oscar prospects of the films opening today. For “Broken Embraces,” he gives Penelope Cruz a shot at a best-actress nod and Pedro Almodovar a chance at an original-screenplay nomination; for “The Blind Side,” he thinks Sandra Bullock stands at better chance with the Golden Globes. (Oscar Watch)

Patrick Goldstein wonders if anybody is unhappy about the Oscar snub of Michael Moore’s “Capitalism: A Love Story.” His conclusion: no. Me, I’m still waiting to see what Jim Toback has to say about it. (The Big Picture)

Anne Thompson asks Tom Ford 16 questions about “A Single Man.” Ford says he is “very much” the character Colin First plays in the film, a gay man despondent over the death of his partner of 16 years, and that many details in the film came from his own life. Furniture, too: “I dragged in my furniture, pits and pieces of art … We hung drapes and made a curved sofa and threw down some shag carpet from Carpet Warehouse.” (Thompson on Hollywood)

Roger Ebert loves Nic Cage’s unhinged performance in “Bad Lieutenant: Port of Call New Orleans.” (He loves a lot of stuff these days.) Owen Glieberman at Entertainment Weekly loves Cage, too. As does Betsy Sharkey at the L.A. Times. And A.O. Scott at the New York Times. Will all that love be enough to squeeze Cage into the best-actor race? It’s a longshot, but stranger things have happened. Not many of them, though.

Gerard Kennedy takes another look at the original score category. He thinks Michael Giacchino leads the pack with his score for “Up” (and maybe “Star Trek” too), likes Thomas Newman (“Brothers”), Alexandre Desplat (“Fantastic Mr. Fox”) and Elliot Goldenthal (“Public Enemies”), and wonders if a comeback could be in the making for Marvin Hamlisch (“The Informant!”). But he also wonders about the unheard music to “Avatar” and “The Lovely Bones”; the former is from old hand James Horner, the latter from ambient/pop musician Brian Eno. (In Contention)